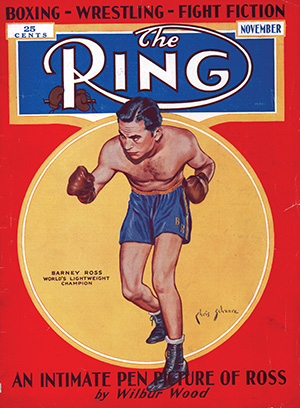 An illustration of Barney Ross on the November 1933 cover of The Ring. Ross was Ring's 1935 Fighter of the Year (and was retroactively awarded the 1933 honor.)
12
Feb
by Mike Coppinger

The longtime advisor to the Hall of Fame fighter will be tasked with shepherding THE RING, known as the Bible of Boxing since 1922, into new territory in relation to strategic partnerships and advances in the digital space.

“I have every confidence that Stefan will be a great steward of the Ring Magazine and lead the publication and its dedicated staff into a new era that will benefit the fans, readers and the sport overall,” said De La Hoya.

“I remember the day I purchased RING Magazine as it was a moment I would have never thought possible as a young kid growing up in East Los Angeles. I still have the same love and respect for the magazine and its writers today as I did back then, and I trust that Stefan will make the best decisions for the publication and be successful leading THE RING into this next chapter in its history.”

Friedman, a native of New York, is looking to leverage the legacy brand and modify it for the 21st century. As part of his new role as publisher, Friedman will take a step back from his duties as advisor to Golden Boy Promotions while continuing to work with De La Hoya in myriad other capacities.

“As a longtime fan and ardent supporter of boxing, I am humbled to be the next publisher of the legendary RING Magazine and entrusted with leading the publication’s business,” said Friedman.

“I’m thrilled to have the opportunity to work with THE RING’S talented editorial staff to build upon the great work they’ve done in sustaining the publication’s reputation and importance to boxing while also exploring new ideas and strategies with digital integration and partnerships that will engage and excite fans of the sport.

THE RING’s print edition is dedicated to enterprise stories, in-depth features on the sport’s power players and colorful columns. The digital brand, RINGTV.com, compliments the legacy of the magazine with breaking news content and hard-hitting stories that lead the industry’s coverage on the web.

THE RING Magazine was founded nearly 100 years ago as boxing’s premier publication for all things related to the Sweet Science. Based in Los Angeles, Friedman will oversee the editorial staff led by Douglass Fischer which includes a network of boxing expert contributors around the world.

“There’s not an outlet in the sport of boxing with a greater legacy name than THE RING,” Friedman said. “As we close in on our 100th year of publication, my challenge is how to marry a legacy brand with modern media tools so that you can have the same great product while reaching a greater number of people.”