Chris Eubank Jr.: ‘I’m too hungry. Groves is not going to last the 12 rounds’ 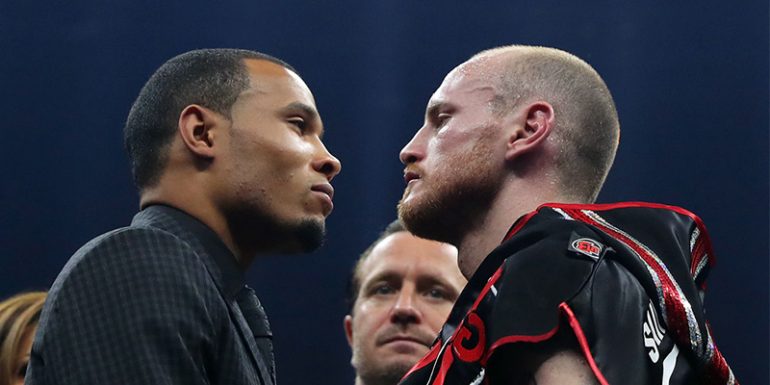 Eubank Jr., who is rated No. 4 by THE RING at 168 pounds, knocked out Avni Yildirim in the third-round of his WBSS quarter-final clash on October 7. Groves followed with a fourth-round knockout of Jamie Cox one week later, and the pre-fight anticipation has been building ever since this all-British clash was confirmed.

“I think it’s gonna be an epic war. I believe George Groves is going to get knocked out,” said Eubank in an interview with RingTV.com. “Groves is a solid, all-round fighter. He doesn’t excel in any one aspect of the sport, whereas I do: speed, strength, grit, determination, stamina. These are all attributes I believe he can’t come close to me in.

“The one thing he does have over me is experience and that’s what I think he’s going to try to use over me in this fight. It’s just not going to be enough. I’m too hungry. He’s not going to last the 12 rounds. I’m gonna go in there and rip that belt away from him.”

Groves, who is rated No. 2 by THE RING at 168 pounds, is a career-long super middleweight, whereas Eubank only moved up to this division one year ago. The results, however, have remained impressive.

“Everything went to plan,” said Eubank of the Yildirim triumph. “I went over there to hostile territory; thousands of Turks baying for my blood in this arena, they all had their ‘Welcome to Hell’ signs. There were some serious brawls; gang fights there. It was a hectic and very intimidating scene to be a part of, but I rose to the occasion.

“My father came into my dressing room and said, ‘Listen I don’t think you should wear the British flag when you walk out because that might be the fuse that sets this ticking time bomb off. They’re going crazy out there.’ I said, ‘No, I’m wearing the flag. I’m representing the country and I’m not going to let anyone scare me.’ And I did that. I wore the flag and I jumped in the ring and knocked Avni Yildirim out.”

For some fighters, such a victory would instill confidence in them that they could move on and win big fights or, in this case, win an elimination tournament packed with world class opposition. But anyone who has ever encountered Eubank knows he has never lacked for self-belief.

“I believed I could win the tournament – I don’t believe any man can beat me – I’ve had that mentality since I started,” Eubank said. “That’s the mentality you have to have if you’re gonna become a world champion of note. My confidence has always been there.”

The 28-year-old boxer-puncher is always calm and has played out all possible outcomes for the Groves fight in his mind, while training at home in Brighton.

“I train to do this. I dream about this. I envisage knocking guys out, stopping guys, beating guys,” said Eubank. “I’m always victorious in my thought process, so when the win does come, I’m not jumping for joy, celebrating and kissing people and hugging. I’m still calm because this is what was supposed to happen. 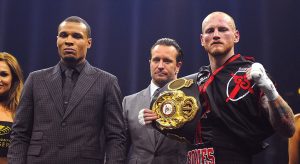 The WBSS tournament has been a huge success at cruiserweight, with both semi-finals producing outstanding fights. The hope is that the super middleweights can continue where the bigger guys left off. Groves-Eubank Jr. has the potential to live up to the lofty billing.

Eubank Jr. is pleased that he could compete in the super middleweight column.

“I think it’s great for boxing,” he said. “I think boxing needs this type of platform where the best fighters fight the best fighters. No ducking, no dodging, everyone signs on the dotted line and you fight. And the winner of the tournament is the best in the weight division.

“The World Boxing Super Series, they’re pulling no punches: the production, the promotion, the money they’re giving the fighters. Everything is top notch and it came at the perfect time in my career.”

While Eubank only sees himself becoming tournament champion, he’s unsure who will prevail in the other semi-final. Callum Smith and former light heavyweight titleholder Juergen Braehmer meet in Nuremberg, Germany, on Feb. 24.

“I’m not really picking sides in terms of who I think will win,” acknowledged Eubank. “I haven’t really seen enough of these fighters. I hope Callum Smith comes away with the victory because I’m a Brit and we want an all-British affair for the final. It’s going to be at the O2 [Arena in London]. It would be good, and hopefully he gets through his fight and we can give the public another great domestic battle in the summer.”

Eubank Jr. already believes he’s the No. 1 super middleweight in the world and the WBSS tournament simply gives him the vehicle to show everyone else.

“I’m going to make a statement,” he proclaimed. “I’m not in this tournament to breeze by and steal rounds and do the bare minimum. I’m here to make statements. I’m here to shock the world. I’m here to let the fighters know, I am the man to beat.

“I want everybody to know that I am the superior man. I’m not going in there to do just enough to win. I want to take this man out.”