Deontay Wilder warns heavyweights: I’ll easily get to 50-0 after I unify titles 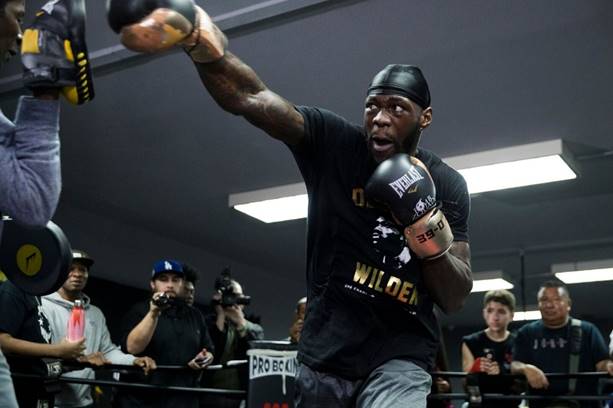 VAN NUYS, Calif. — Deontay Wilder certainly doesn’t lack for confidence. And why should he?

The 6-foot-6 heavyweight is undefeated through 39 pro fights and he’s knocked out every opponent who’s stepped in the ring with him.

His last foe, Bermane Stiverne, found himself unconscious, slumped over the bottom rope. And as Wilder prepares for his toughest challenge yet, RING No. 4 heavyweight Luis Ortiz on March 3 in Brooklyn, the WBC heavyweight titleholder is throwing out a warning for the other men in his division.

“Once I unify all the titles then line up the mandatories, I’ll easily get to 50-0,” Wilder, THE RING’s No. 2 heavyweight, said Thursday as he worked out at Team Watson Boxing Club. “I’m not a 12-round fighter, and I don’t get overtime. I’m a knockout artist. So that being said, I don’t take much damage, but I give all the damage.”

Wilder (39-0, 38 knockouts) has certainly inflicted plenty of harm on his opponents to this point. And to unify titles, the Olympic bronze medalist will have to secure the super fight he so badly desires with Anthony Joshua.

The Brit fights Joseph Parker on March 31 (also on Showtime) and if Joshua wins as expected, he’ll hold three heavyweight titles. Wilder holds the other belt, but he’s yet to face a fighter the ilk of Ortiz, an accomplished amateur who can bang and box.

They were slated to meet in November, but Ortiz failed a PED test. Now, they’re set to clash once more, and it’s Ortiz who is standing in the way of Wilder’s dream to face Joshua.

“This is one of the biggest fights of my career and I’m up for the challenge,” Wilder said. “I’m going to pass with flying colors.”

The great Rocky Marciano reached 49-0 and then retired. If Wilder can indeed reach his lofty goal, he won’t just be undisputed. He’ll be legendary.