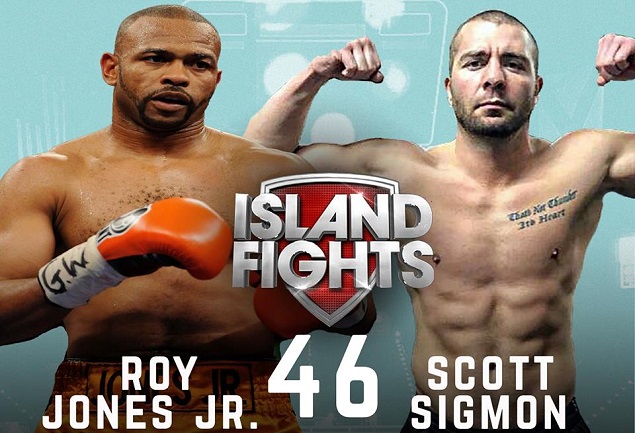 I say “strangely” because – hello – UFC is about mixed martial arts and Roy Jones isn’t.

However, most of you reading this understand that UFC bossman Dana White had announced his intention, months ago, to dip his toes, and probably more, into the boxing pool. Makes sense, being that he saw the faithful nature of its buying base, when his guy Conor McGregor agreed to trade a loss for a pot of gold, debuting as a pro boxer against Floyd Mayweather Jr. last summer. Many of you hated that pairing, turned up your nose at it and continue to be dismayed when media post stories talking about a possible #Maygregor rematch, this time possibly in a UFC Octagon, using, assumedly, MMA rules.

But did UFC broadcasting Roy’s last fight “make sense”? Not to my thinking, as a stand-alone endeavor. No, not even if White is such an RJJ fan that he wanted to have a part in his adios bout.

Now, to reiterate, I didn’t watch the Jones-Sigmon deal. I didn’t have a strong stance on why I would or wouldn’t but, basically, I figured I had better things to do, at that time. So I got caught up on the lunacy of the POTUS and his band of malignant pranksters. I sneaked peeks on Twitter and saw that Jones won his farewell match. And then was surprised – dammit, I’m old enough to know better. I shouldn’t have been – when Jones said he was open to fighting on, if UFC’er Anderson Silva wanted to battle.

So that’s what this was about? This wasn’t a random occurrence or an homage by White…This was a planned construct, to have Jones advertise this bout as his exit extravaganza…and then after shutting the door, kick it open and attempt to build buzz for a novelty match against Silva.

Roy Jones Jr. after beating Sigmon: “Dana, I know you’re listening. I know Anderson Silva’s suspended but that’s the only other fight Roy Jones will return for. Other than that, the chapter’s closed.”

A planned construct, that’s what this all LOOKS like; doesn’t it?

I called out the UFC Fight Pass Twitter account, opining that this was a sneaky plan to catch viewers and generate interest. In turn, the account’s handler defended the company honor in this counterpunch… 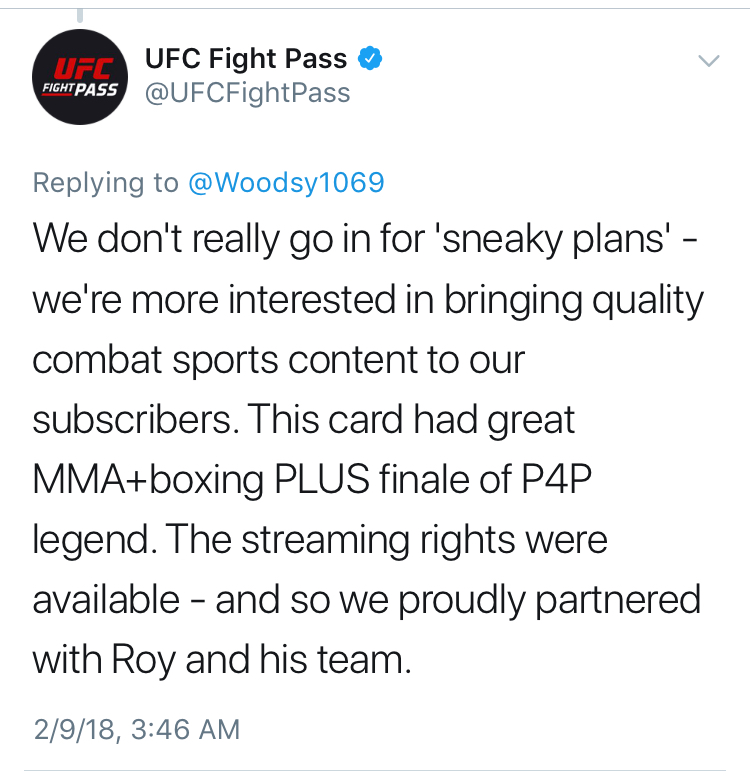 …but if we see and hear chatter of a Jones-Silva face-off, moving forward, I think that is a tacit admission that the Jones “farewell” fight storyline was bunk…That would not surprise most of us, being that Mayweather plays the “retire then un-retire” card regularly. Cynics believe Andre Ward is doing his own version of this gambit currently, though people close to him insist that isn’t so. Time tells…

Part of me wants to give this practice a pass, being that I sort of write it off as a “showbiz” element of the boxing business…but then another part of me says no, let’s curtail these false exercises because they rely on lying, to help build a storyline. Blurring the line and moving it more toward the pro wrestling realm of acceptable practices is NOT progress..

If Jones truly wasn’t intent on not fighting again, then he shouldn’t be pretending otherwise…and same goes for Floyd and anyone else wanting to use this card, which, I admit, is effective as hell. Let’s find other ways, shall we, to generate buzz and build interest than by going the route that some music biz smarts insisted would boost interest. Advertise the tour as a “farewell” gala, and forthcoming scarcity of product heightens interest in purchase. Maybe I should chalk it up to “buyer beware” territory but maybe that’s simply surrendering to a diminishment of standards and I don’t think that’s ideal.

Readers, what say you? You OK with Jones faking a retirement, if that was/is his plan, and Floyd’s retire/unretire “rinse and repeat” ploy? Should we all just accept this publicity-stunting as a mildly shady but inevitable and overall basically benign practice? Talk to me.