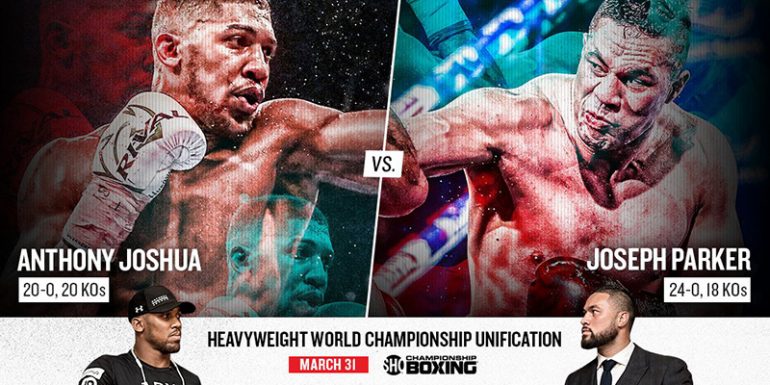 Anthony Joshua is seeking to add a third heavyweight title to his collection, and once again, his quest to take over boxing will televised live on Showtime.

The network announced Monday that it has acquired the right to Joshua’s heavyweight title unification matchup against Joseph Parker, scheduled for March 31 at Principality Stadium in Cardiff, Wales.

HBO made a push to air the fight, but Showtime retained a right of last refusal and matched their rival network’s bid, sources told RingTV.com. The clause was in the contract following the expiration of its three-fight deal with the heavyweight kingpin. 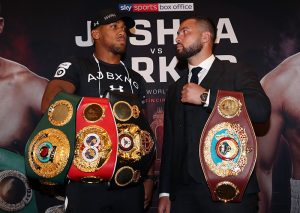 Anthony Joshua (left) and Joseph Parker are ready to put their WBA, IBF and WBO world heavyweight titles on the line on March 31. Photo / Matchroom Boxing

“The heavyweight division is in the midst of a renaissance, and Showtime is delivering all of the pivotal bouts to our subscribers,” said Stephen Espinoza, Showtime Sports President. “Anthony Joshua is a global superstar, and we’re proud to present his sixth, and perhaps most challenging, world title fight to the U.S. audience.

“Joshua vs. Parker will be the 12th heavyweight world championship match on Showtime since Deontay Wilder won his title in 2015, an undisputed industry-leading offering in boxing’s preeminent division.”

Before Joshua and Parker (24-0, 18 knockouts) meet, Wilder will defend his WBC heavyweight title against Luis Ortiz on March 3 in Brooklyn, New York, and that fight will also be carried by Showtime.

The hope is that Joshua and Wilder will prevail, setting up a super fight between the two big men to decide heavyweight supremacy in a fight for THE RING’s vacant heavyweight championship, which became available after Tyson Fury was stripped last week.

Joshua (20-0, 20 KOs) is THE RING’s No. 1 heavyweight, and his fight against the No. 3 man in the division is just the second ever heavyweight championship unification bout between undefeated world titleholders.

Showtime announced a slew of compelling fights last month, and with HBO’s schedule pretty bare, this is yet another haymaker landed by the network in its battle with HBO.