Jose Benavidez Jr. on Terence Crawford: ‘All he does is run his mouth’ 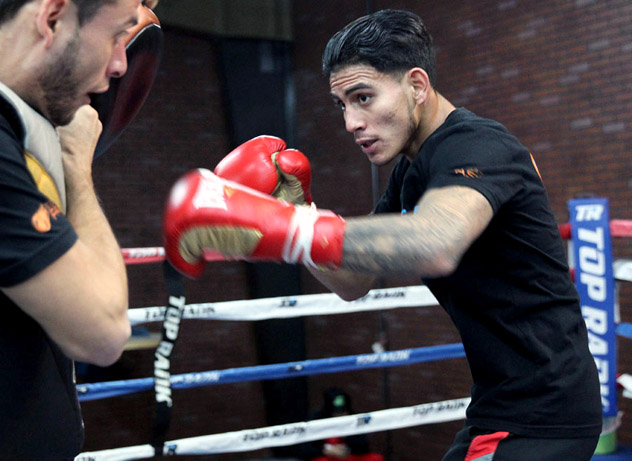 One of the more buzzed about altercations of the last week took place, not in a boxing ring, but at a weigh-in on Friday.

Unbeaten welterweight Jose Benavidez Jr. was in Corpus Christi, Texas, for his scheduled bout on a Top Rank show, portions of which ran on ESPN.

Before Benavidez, age 25, hit the scale, he spied fellow-Top Rank scrapper Terence Crawford. The two-weight world champion was in attendance for good reason; to support trainer/manager Brian McIntyre, on site to do prep work for his Saturday night role helping with commentary for Top Rank.

Benavidez, whose little bro David holds the WBO 168-pound strap, saw “Bud” and started chattering at him. He asked Crawford why the Nebraskan had ducked him; a theme he’s brought up for about three years.

“I don’t duck you,” said Crawford, who was smiley at first and not too perturbed. But the conversation escalated, with Crawford warning Benavidez to, “Focus on your fight, ‘fore you not make it to your fight.’”

Crawford didn’t specify how that might come to pass, but it sounded sinister. The situation was now heated. He was encouraged to walk away, however the pound-for-pound entrant invited Benavidez to exit the building and have an impromptu spar.

I messaged Benavidez on Sunday. What was that all about?

“I told him he was next. All he does is run his mouth but keeps dodging me, then tries to act all tough, saying let’s go outside,” Benavidez said. “So why outside when I was right in front of him?”

In August 2016, Benavidez was walking in his hood in Phoenix, Arizona when he was shot three times by, according to him, a man he doesn’t know. In his first fight since that gun attack, he beat Matt Strode (TKO8) underneath the Zurdo Ramirez-Habib Ahmed main event.

Crawford will try his luck and skills at welterweight for the first time on April 14 in New York. WBO titleholder Jeff Horn is set to be “Bud’s” rival that night. And what about after that? Does Benavidez think Crawford will accept his challenge?

“We will have to wait and see,” concluded Benavidez.