Ancajas may face mandatory Sultan next in all-Filipino title defense 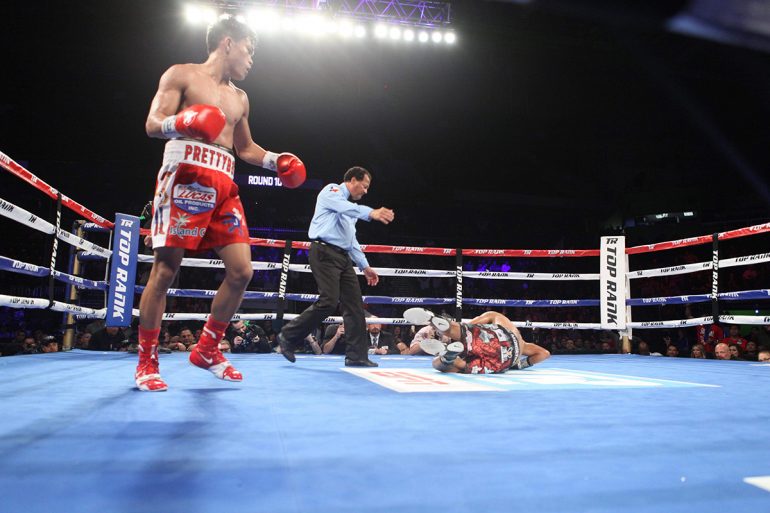 It was also the 16th straight win for Ancajas, 15 of which came by knockout, and a sweet end to his first fight under the Top Rank banner, which was televised live in the Philippines and the U.S. on ESPN.

The next challenge for Ancajas could be a fighter from his home country, as his mandatory defense against No. 1 contender Jonas Sultan is due shortly, Ancajas’ matchmaker Sean Gibbons tells RingTV.com.

“We have an IBF mandatory so we’re gonna move forward with Jonas Sultan and we’re gonna do the all-Filipino battle,” said Gibbons. “Hopefully we can do that in Los Angeles or a big Filipino community somewhere in the States, maybe San Francisco.”

A fight between Ancajas (29-1-1, 20 knockouts) of Panabo City, Philippines, and Sultan (14-3, 9 KOs) of Tampilisan, Zamboanga del Norte, would be the first Filipino vs. Filipino world title fight since 1925, when Pancho Villa retained his championship with a 15-round decision win over Clever Sencio in Manila.

Sultan, who fights out of the ALA Boxing stable, ascended to the top ranking when he defeated Johnriel Casimero in an elimination bout last September for what was considered a minor upset.

Sultan had previously been hesitant to make the fight against a compatriot, while promoter Michael Aldeguer had said in the past that ABS-CBN, the network which hosts ALA’s Pinoy Pride series, and the show’s sponsors aren’t interested in Filipino vs. Filipino title fights.

Following Ancajas’ victory over Gonzalez, Aldeguer tells RingTV he is “just waiting for formal negotiations to start” for the Ancajas fight, and that “we have informally talked with Sean about it but nothing concrete.

“At first it’s difficult to fight another Filipino for a world title but if circumstances mandate it then we have no choice.”

Sultan, who like Ancajas is 26 years old, appeared game for a challenge against the emerging standard bearer of Philippine boxing.

“It’s up to Mr. Jerwin if it’s about to happen, but for me I’m always ready for him because I’ll always prepare for any upcoming fight for me,” Sultan tells RingTV. “I’m world ranked number one.”

Gibbons says he hopes to see the fight get made “no later than May,” and that promoter Bob Arum wants to have Ancajas fight four times a year. Gibbons, who had worked with Casimero, says he’s familiar with Sultan’s approach and is confident that Ancajas would have a more crowd-pleasing performance against Sultan.

“He’s a perfect style for Jerwin because he’s flat-footed, he’s right in front of you. Jerwin is going to look a million percent better with Sultan, who’s not a guy that moves, and he can just tee off on him. He just comes right at you, nothing slick about him. He’s just a dead-game Filipino with an in-your-face type of style,” said Gibbons.