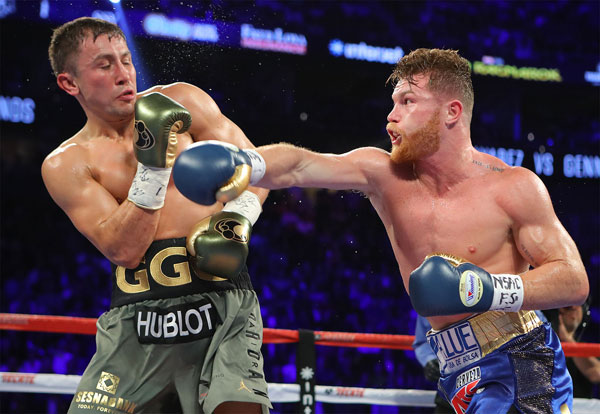 May will be here before you know it, if you happen to be living somewhere where you must bundle up heavily when choosing to step outside. Yes, warmer weather will arrive, and with it the promise of a top-tier chess match of strength and speed and guile and stamina and … what? What factors will play more or less in the sequel showdown between Gennady Golovkin and Canelo Alvarez on May 5, site TBA.

Fans have debated and analyzed since the bell rang to end the first encounter, which will stand as a majority draw in the record books despite many — if not most — pundits feeling the Kazakh vet deserved to have only his hand raised to cap the evening.

I put it to GGG trainer Abel Sanchez, who is in Russia to corner his cruiserweight young gunner Murat Gassiev in his WBSS semifinal scrap. The aim would be to win conclusively this time? Does that mean press more, look a bit harder to pressure and gun for KO?

“Triple-G won the first fight; the judging was questionable,” Sanchez asserted. “Canelo is saying the same things he said before first fight. He chose to run and not try and knock out Triple-G. He is talking brave again … It could be a different action fight if he is a man of his word and does what he says. In order to KO Triple-G, you have to try and do it. It’s gonna take more than pitty-pat punches and running to accomplish that against the best fighter in the world!”

My three cents: So there you have it; smart stuff from Abel. He knows that Canelo is a marvelously skilled defender who when trying not to get hit succeeds pretty darn well. And maybe he knows that Canelo thinks his power pack isn’t sufficient to drop and stop GGG … so he’ll fight the sage way, look to be the better ring general and not indulge in a “whose nuke is bigger?” tradefest. Is that what you are thinking, readers?