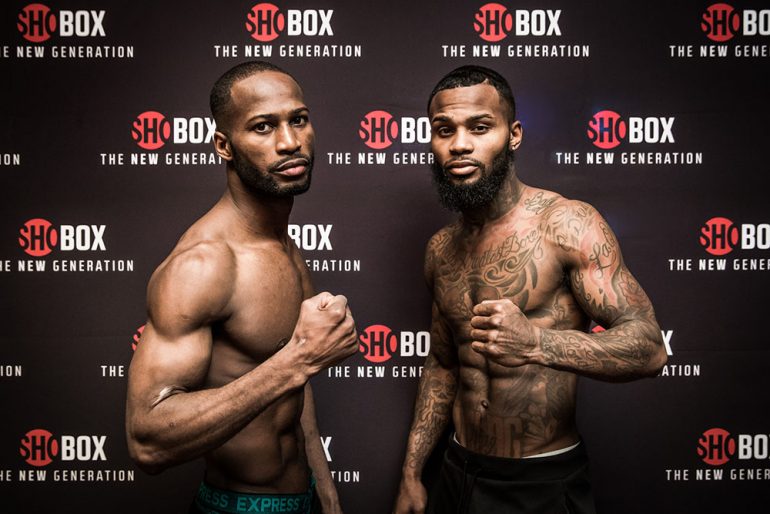 Samuel Teah will do what he normally does before a fight. He’ll steal away by himself and run his fingers over the six numbers stitched into the back of his trunks before putting them on.

Teah will take a second, close his eyes and think of them: Vivian, and Eliott, and Jennifer, and Ramere, and Mariam, and baby Zyhire. He’ll take himself to a place where they can sit and watch him perform, where they could live this moment with him in front of the world.

Then he’ll step into the ring against undefeated Montana Love tonight at the WinnaVegas Casino & Resort in Sloan, Iowa. Reality will barge into real time and he’ll get himself ready to fight.

This foray on Showtime’s ShoBox program will be Teah’s second under the glare of national TV, and he knows the challenge he’ll be up against in the 23-year-old southpaw Love (8-0, 4 knockouts). Teah (12-1-1, 5 KOs) also knows the opportunity that awaits if he wins the scheduled eight-round junior welterweight fight.

What Love may not know is that he’s stepping into the ring with seven – not just Samuel “Tsunami” Teah.

“This is like any other fight. I’ve fought before on TV,” Teah said. “I’m ready for this. The memory of my family is why I do it. Any fighter out there wants to be a world champion, and I expect to be one day. This is big for me. I think everything after this fight will be bigger for me.

“I feel more developed and more prepared as a fighter. I figure I’m in an elite class of fighters, and this is my chance to show what I can do.”

Teah, 30, also knows his “side” in this fight. Love is undefeated and has a decorated amateur past. But while Teah may be the “B side” when you line the fighters’ stats against each other, he doesn’t see it that way. It’s Love who’s more at risk facing someone like him, Teah figures.

And that may be true.

“Love will keep me on my toes,” said Teah. “I don’t know too much about him, which is actually a plus, because when you know too much, you look for certain things. It’s a good way to feel too comfortable. When you don’t know much about an opponent, in my opinion, you have to watch for everything.

“You don’t make a breakthrough until you’re a ‘B side’ fighter and you pull off an upset. I’m going to make it an ugly, brawling fight. I’m going to take it to him.”