Jerwin Ancajas making U.S. debut, but fans have him feeling at home 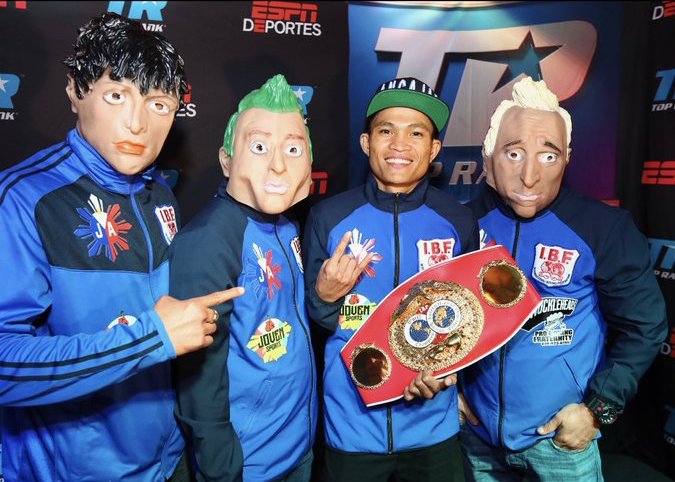 It’s been nearly 17 years since Manny Pacquiao, the co-promoter and mentor of Jerwin Ancajas, made his big splash in the United States. This Saturday it will be Ancajas’ turn as he puts his IBF junior bantamweight title at stake for the fourth time, against Israel Gonzalez at the Bank of America Center in Corpus Christi, Texas.

The circumstances are different, but with an audience of millions on ESPN in the U.S. and the Philippines, Ancajas is eager to show that he too can generate that level of pride and excitement for fans both home and abroad.

“That is why coach Joven (Jimenez) and I are pressured, because we all know that it is hard to equal how sir Manny Pacquiao impressed the Americans. Because we know that Americans have a different taste when it comes to boxing,” said Ancajas (28-1-1, 19 knockouts), remembering how Pacquiao demolished Lehlohonolo Ledwaba on short notice to win the IBF junior featherweight title in 2001.

“Even if it’s not at par with sir Manny’s, because how he won there was really something else. He was the challenger and yet he beat the champion. In our case it is the other way around: We’re the ones defending, we have to impress with this fight.”

Ancajas, 26, of Panabo City, Philippines, came face to face with Gonzalez (21-1, 8 KOs), a brash young competitor who is fighting outside of Mexico for the first time, at Thursday’s press conference. Gonzalez vowed to spoil Ancajas’ debut with Top Rank, a threat which Ancajas took in stride.

“He said at the press conference that he’s going to win the belt and bring it home. He’s tough and determined, I can see it in his eyes,” said Ancajas.

“His opponent is very determined and hungry, looking to grab his belt,” said Jimenez, who said Ancajas was at 115.5 pounds the day before the weigh-in. “I think this is a good fight.”

Even if he’s an ocean away from home, the fan support he’s received has been substantial. Filipino fans from all over Texas have stopped by the hotel he’s staying at to ask for autographs and take pictures with the fighter many believe will run with the flag in the post-Pacquiao era.

It’s not quite yet the Mandalay Bay lobby on Pacquiao fight week, but it’s a sign that “Pretty Boy” is catching on with the same fanbase that elevated Pacquiao to superstardom.

“It was heart-warming, the support that the Filipino community in Texas gave me,” said Ancajas. “They would always visit me at the hotel, at the press conference. A lot of them came, so I felt like I was still in the Philippines.”