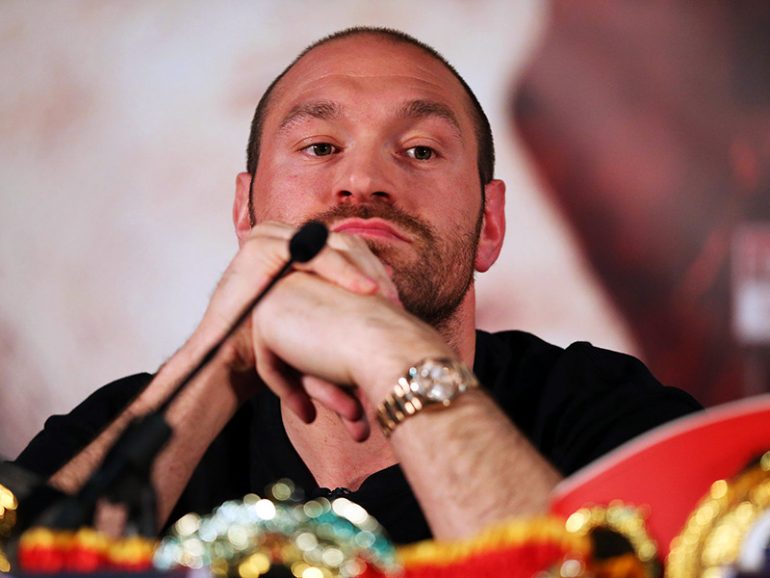 The powers that be at THE RING mag have been patient with Tyson Fury, oh so patient, and resisted the call from sideliners to vacate THE RING title he held and yank him from the ratings at heavyweight.

Patience finally fully waned, though, and the RING brigade removed the big lad from the championship slot in the heavyweight top ten. Word dropped on Thursday that the move had been made, and Fury would have to fight his way back onto the list.

He’d been quite active out of the ring for the last couple years, retiring, and un-retiring, and lobbing spitballs on Twitter at fellow pugilists, and oversight personnel who, he believed, had been holding him 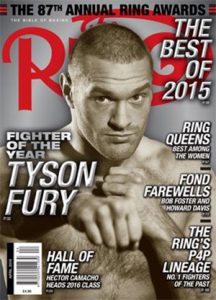 The 29 year old has been training for a spell now, it looks like, and is whittling his massive frame down from overly generous, he hopes, to merely massive again. The British Boxing Board of Control has decided he’s fit to fight, and word is we could see the Traveller rumbling again in April. He doesn’t have a fight date or foe locked in, but promoter Frank Warren seems confident the XXL talent will be back on the horse soon enough. His last in ring outing was in November 2015 though, so RING mag EIC Doug Fischer and company felt compelled to make a move to strip.

I reached out to Fischer, a California resident, to get a sense of what the thought processing was on why Fury got stripped:

“The Fury situation was one that I wanted to address as soon as I became editor of THE RING magazine. Although I consider myself a Tyson Fury fan, I personally believed that he should have been stripped of the title last year when his boxing license situation and his case with UKAD were in limbo. I think the previous editor (Michael Rosenthal) had a soft spot for the big guy, which I totally understand, and he was in contact with Fury’s former promoter Mick Hennessy, who was good and putting off any decision on our side by constantly promising that a resolution to Fury’s legal woes were coming to a conclusion. There were also some members of the British sports media that led Rosenthal to believe that Fury was the victim of foul play or some kind of conspiracy by the UK boxing establishment, and I believe this added to his leniency toward the big lug,” Fischer explained.

“However, by the time I got the editor gig in late October, Fury was back in training and had signed a deal with ‘Mack The Knife’ management company (MTK Global), a serious outfit and player on the UK scene, so rather than push to have Fury stripped immediately, I had Associate Editor (and UK correspondent) Tom Gray contact MTK and give his team a hard deadline to get his license back and formally announce a scheduled comeback fight. That deadline was January 31. They had three months to get something done and they weren’t able to do it.

“I don’t think it was fair for Team Fury to keep what was once the biggest prize in sports (and still holds a lot of prestige in the UK) prisoner, while there were heavyweights and heavyweight fights that were/are potentially worthy of fighting for it (such as the Joshua-Klitschko and Joshua-Parker title bouts).

“The Ratings Panel doesn’t believe Joshua-Parker should be for the vacant title, but it should at least be in the conversation when you have two undefeated titleholders meeting in the ring. The Panel and the public should at least be able to discuss whether THE RING title should be on the line, and that wouldn’t happen if Fury had remained RING champ. He was basically holding the title hostage. He had a huge bargaining chip that he didn’t deserve to hold. Fury had earned it in the ring in November 2015, but he lost the right to keep it by not defending it.

The RING Ratings Panel discussed this recently and you can read about it in this week’s Ring Ratings Update.

Good transparency from EIC, there…

Just like to thank the @ringmagazine for being so patient with me over the last few years. this will be the first time since 1922 that the ring magazine will split from the heavyweight lineage. Tyson fury always setting precedences. ?? https://t.co/fJR0MKDsTN

Or maybe he’s royally irked…Seems like he’s taken it with two grains of salt, and isn’t off on an angry tangent. Because, let’s face it, he’s not one to be subtle, typically, if he wants to rip someone a new hole.

Your thoughts, friends? Did we make the right call…or should Fury have been given the benefit of more time? Talk to us, in comments section.