Jerwin Ancajas: I can’t say I’m the best until I beat the best 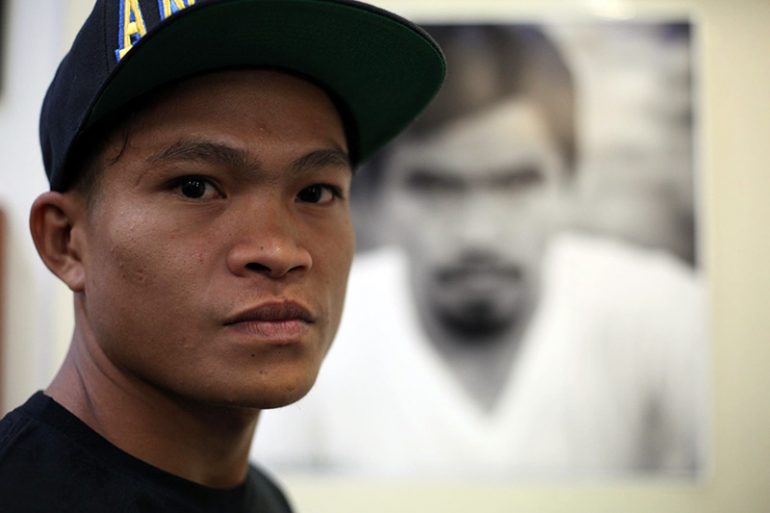 Even as his name gains traction, Jerwin Ancajas doesn’t want to call himself the best until he’s beaten the best.

The 26-year-old junior bantamweight titleholder, now of Magallanes, Philippines, will make the fourth defense of his IBF belt this Saturday, February 3, when he faces Israel Gonzalez at the Bank of America Center in Corpus Christi, Texas. The fight will be shown live on ESPN both in the United States and the Philippines as the co-featured bout underneath the WBO super middleweight title fight between Gilberto Ramirez and Habib Ahmed.

His solid fundamentals, crippling body punching and power that has seen him stop 14 of his last 15 opponents have given fans reason to be excited about his U.S. debut, but Ancajas isn’t buying his own hype just yet.

“Until I would be able to go up against [the other champions], I cannot say that I am the best. I need to prove when I go up against them that I can beat them,” said Ancajas.

“I want to beat them first before I say that I am the best…but if I haven’t yet then I will not say a word. I want to work hard against them.”

It’s a mindset also held by his trainer/manager Joven Jimenez, who says “I believe he can do it. He has the [toughness] and skills.”

Chief among those whom Ancajas would prefer to prove himself against, at least following the ascension of Naoya Inoue to bantamweight, is Srisaket Sor Rungvisai, the WBC 115-pound titleholder from Thailand who made his bones with two upset wins over Roman Gonzalez. Sor Rungvisai will face mandatory challenger Juan Francisco Estrada on February 24 in the main event of the second “SuperFly” card on HBO Boxing After Dark.

“Right now, I want the Thai because he is the best among us. At first I wanted Inoue because he was difficult, he had strength and was really good. I also want this Thai because he defeated the best, Chocolatito, that is why I want to fight against him. I want to try, as a fighter, I want to try his expertise, his strength,” said Ancajas.

Ancajas also said a showdown with WBA belt holder Khalid Yafai (23-0, 14 KOs) would appeal to him due to his credentials at the 2008 Olympics representing Great Britain.

Ancajas’ matchmaker Sean Gibbons has said that he’d like to next test his fighter against one of the “second tier guys” like Cuadras to “see where he’s at.”

Ancajas spent a couple of days in Los Angeles to be showed off the press at Wild Card Boxing Club by his new promoter Bob Arum before arriving Sunday in Texas to count the days down before fight night. Jimenez says Freddie Roach advised Ancajas to work hard, and says Arum’s subtle interaction also registered with Ancajas.

“Sir Bob smiled at him and gave advice: show [me] what you got,” said Jimenez.

Ancajas, a former amateur champion with two gold medals at the Philippine National Games and one at the Palarong Pambansa, is set to make his first six-figure payday for this fight. Gonzalez (21-1, 8 KOs) is an opponent with little footage available of him online who was scouted in Mexico by Gibbons on two previous occasions.

“What I’ve seen of him is his work on the mitts…I can tell that he is a good boxer because his punches are perfect, and he has good footwork. I also saw his sparring and I could see that he has a technique, I see him as a real boxer,” said Ancajas.

“That is why I said to myself this fight will boil down to who will have the mentality, the brains. I will also need to pressure him, we have to put the pressure on him.”