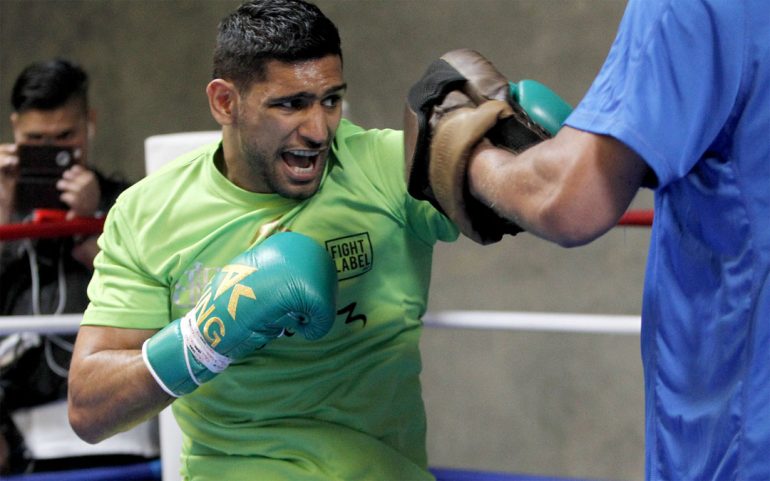 We have a dance partner.

Khan (31-4, 19 knockouts) will return to the ring for the first time since being knocked out by Canelo Alvarez in the sixth round of a middleweight title bout in May 2016. No weight has been stipulated for the Lo Greco fight, although the Toronto native has been competing predominantly around the junior middleweight limit in recent fights.

“I can’t wait to get back into the ring on April 21 at the Echo Arena in Liverpool,” said Khan. “Phil Lo Greco will be coming with everything to win this fight and I’m not going to give him an inch. He’s an aggressive fighter who is always looking to press the fight and come forward. That makes for a very exciting and action-packed fight for the fans.

“He’s shared the ring with the likes of (Errol) Spence Jr and (Shawn) Porter, so he’s operated at the highest level. I respect him as a fighter and know he will be coming with big ambitions. But I’m going to put on a great performance and prove to the boxing world that the ‘King’ is well and truly back.”

Lo Greco will come face-to-face with Khan at a press conference in Liverpool tomorrow. That event should be lively with the visitor promising that Khan’s comeback will be short-lived.

“Being my first fight in the U.K., I’m excited about the crowd,” said Lo Greco. “I can’t wait to feel that energy. As much as U.K. fans love their fighters, they love great fights and I promise just that. This night will go down as one of the best fights ever in the U.K.

“I’d like to thank Eddie (Hearn), Sam (Watson), Al Haymon and, of course, the entire Khandashian family for letting your daughter come out and play.

“I’m happy Amir decided to yank up his skirt and end his long-going tea party. It was time he manned up. I’ve got a full training camp this time around. There will be no room for error. Amir Khan will be knocked out.

“I’ve noticed Amir loves going to Dubai, so I’ll send him to Du-bai, and he’ll go bub-bye. Boxing teaches us, history repeats itself. Once you’re knocked out cold, it only gets worse.”