Matthysse-Kiram to test power vs. jab, aged vs. youth, known vs. unknown 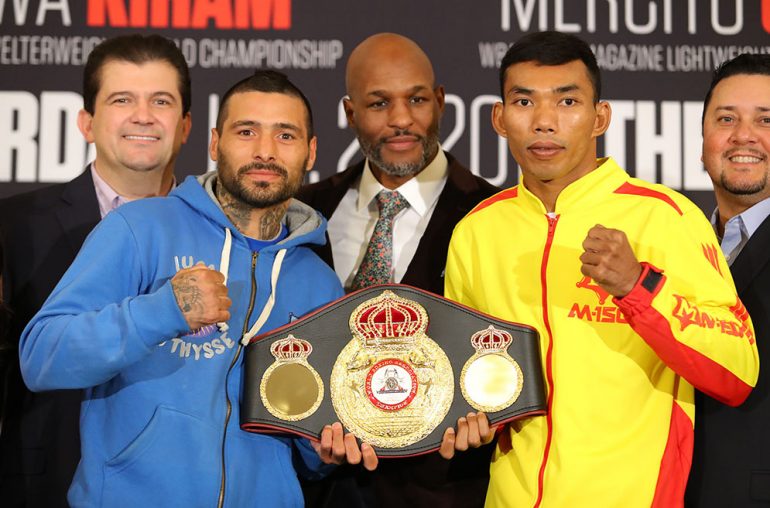 Seasoned fight watchers know that just because you don’t know much if anything about a guy, that doesn’t mean he sucks. Now, he might suck; it might be for good reason that you haven’t heard much about a fighter … or it could be a marketplace aberration. This rough diamond might have fallen into the cracks, might be off-radar because he’s been mismanaged or mispromoted, or he fights far away from the U.S. and his bouts haven’t been televised that much.

This is my preamble to tell you that you and I are in the same boat: We don’t know much about Tewa Kiram, the Thai fighter who is the underdog on Saturday night against a very well-known name in the game, Lucas Matthysse.

First thing that stands out on Kiram is a gleaming record. The 25-year-old hitter is 38-0 with 28 KOs. Harder scrutiny of his Boxrec page tells you that mark has been fairly skillfully contsructed. He’s fought and beat people you have heard of: Randy Suico in 2013, Kaizer Mbuza in 2015 … but two fights ago he beat a pro debuter. So, to rely on record alone in assessing his chances versus the 38-4 Matthysse would be a fool’s errand.

HBO will show the tango, which has a Saturday start time of 10:30 p.m. ET. The scrap will unfold at the Fabulous Forum in LA, for the record.

Kiram’s best hope might be that Matthysse, at 35 years old, will be unable to summon past glory, to get back to a mode where he was a feared puncher and his name recognition helped make him a top 25 attraction. He was off 19 months before he beat Emmanuel Taylor last May, and one wonders how much his heart and soul is into this endeavor. He’d lost to Viktor Postol before his hiatus, but maybe that was mostly because he was ill-suited to make 140 and he was drained … and now maybe he’ll restore some lost luster 7 pounds northward.

Matthysse told HBO’s Kieran Mulvaney, “I know my opponent, I know his record, I’ve seen some of his fights, I know he’s a tough opponent and hasn’t fought out of his country, but truthfully I expect a tough fight.”

Kiram told HBO, “I’m very confident that I’m going to come back with a win.” He cited his hard jab as a difference-maker. Matthysse said he’s ready for that.

We haven’t seen all that many Thais excelling on U.S. stages in the sweet science. Srisaket Sor Rungvisai, though, helped that nation get on our radar screens with his handling of Roman “Chocolatito” Gonzalez, twice.

Can Kiram continue the momentum?

He told Conte that he will have to see in the ring, but he likes his gameplan. The ex-Muay Thai fighter explained that he ran through all the possible MT foes and that’s why he came into the sweet science. 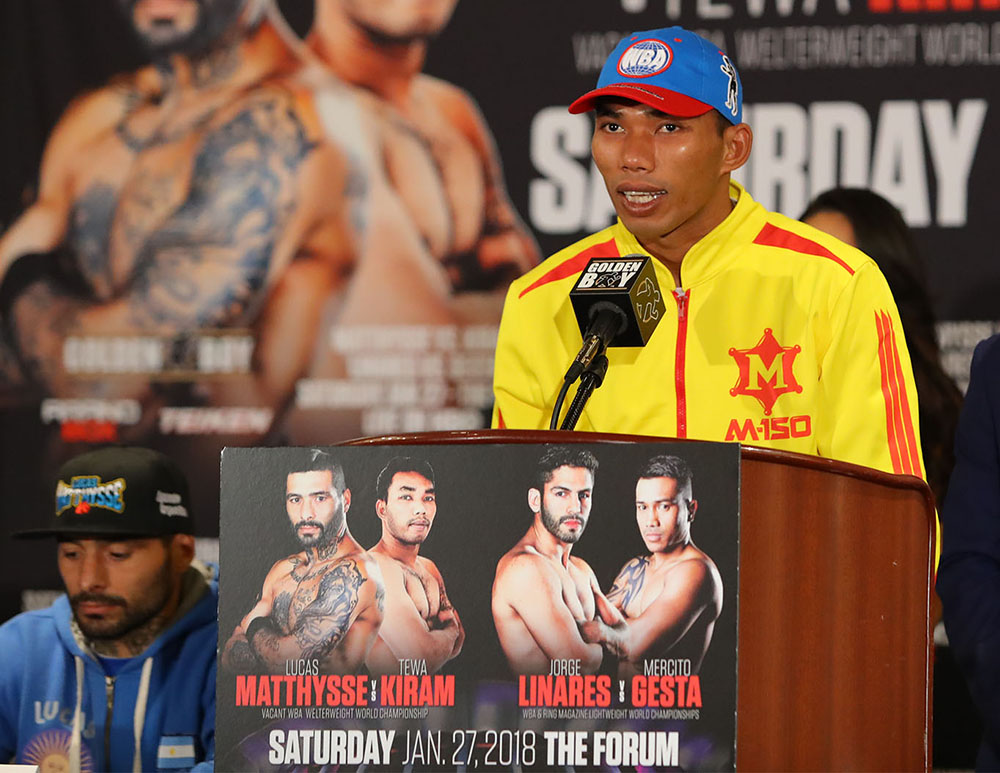 He comes off as a chill, low-key dude in interviews. Asked to offer a prediction, he said he hopes the Thais in LA will come out in force, and that the bout will be televised back in Thailand. And is he aware of the Srisaket momo? Will he continue along that path? He hopes to, he said, humbly.

Team Matthysse and promoter Golden Boy hope that Matthysse doesn’t look like an old 35, that he will be able to exploit holes in the Thai’s lack of big fight experience as well as his tendency to get wide with shots, lean and offer his head on platter.

Eric Gomez told all at the final presser that LM is jelling very well with trainer Joel Diaz, and he thinks dividends will be obvious. Movement, he noted, is now better. Diaz says he likes the Argentine’s heavy hands, and, “You will see a great fight, and a new Lucas Matthysse.” Gomez told me, when I asked for quick assessment of Kiram, that he is “big, strong, aggressive.”

At the final presser, Matthysse was his usual self. No shit-talking or nasty-faced posturing. He looked dialed-in, not too drained, and said, through interpreter Roberto Diaz, that he started camp in Argentina and finished it in Indio, and would like to return to glory. “We’re ready to take that title back,” he said, referencing past crowns.

My three cents: Off some video-watching, I’m thinking that Kiram will be surprised by the speed that Matthysse will show Saturday — of foot and more so of hands. I think Kiram can be a little predicatble and slow in his movement, his head and torso movement, and Matthysse might be able to find him early and hurt him with accurate launches. But his jab ain’t a joke; if Matthysse’s reflexes have dulled like they can dull at age 35, that Thai jab could be bothersome and set the table for an upset. I was thinking this mught be a 70-30 fight in Lucas’ favor, but will defer and give final word to Gomez. The ace matchmaker, along with Robert Diaz, regularly gives us coinflip fights which aren’t regarded as such by us fans and media who don’t know as much as they do. “This is a 50-50 fight,” Gomez told me. “Kiram is dangerous.”