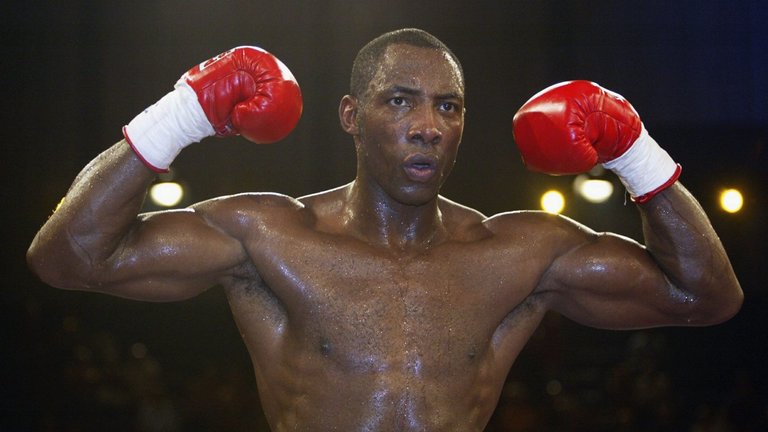 Former WBO cruiserweight titleholder Johnny Nelson was one of boxing’s most unlikely world champions. With minimal amateur experience, he learned on the job and went on to become the longest reigning cruiserweight champion in history.

Nelson was born in Sheffield, England in January 1967. He was from a family of six and attended a Catholic school, which he left without qualifications.

“I didn’t find boxing, boxing found me,” Nelson told RingTV.com. “I wasn’t an aggressive person. I wasn’t a tough man. I was just a man in a tough job. I only boxed because my mates did. It’s where my social circle was. I never actually wanted to fight. I just wanted to train at the gym with the boys.

“The downside was I had to fight at the amateur shows. I had 13 amateur fights and only won three. I didn’t care when I lost.”

After boxing as an amateur for two years, Nelson elected to turn professional at 19 because he saw people getting paid.

“[Trainer] Brendan [Ingle] always said I’d make a better professional than an amateur,” recalled Nelson. “Everyone thought Brendan was crazy saying, ‘The kids useless, he’s no good’. I thought, I’ll have five professional fights and if I don’t win one, I’ll get a proper job. I’ll apply for the police force.”

Nelson turned to the paid ranks and simultaneously held down three jobs. He lost his first three fights, however, one of those setbacks, against former amateur standout, Magne Havnaa, gave him confidence.

“I thought, if I’m that bad, that rubbish, how come he’s not got rid of me? Maybe I’m not that bad after all. That’s how I started to think. I won the fourth fand fifth fights. I thought, I’ll get to 10 and see how we go. I kept giving myself five fights and that’s how I got into it.” 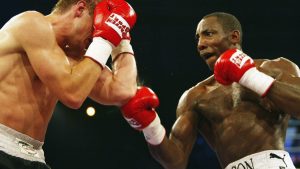 Considerably more motivated than he had been as an amateur, the eager young prospect began winning more than he lost. On May 21, 1989, Nelson remarkably captured the vacant British title on the undercard of the Nigel Benn-Michael Watson fight. Nelson says that along with becoming world champion, that was his proudest moment.

“I wasn’t expected to win,” he said. “I was on the bus back thinking, ‘I’ve won the British title.’ It showed, Brendan Ingle’s system worked. I didn’t have the talent. I had to work from scratch in that gym.”

“As a professional, I didn’t think I was any good,” admitted Nelson. “I thought the opposition was bad and that I was fortunate to be in the position where I boxed people that weren’t very good.

“It was a day of reckoning. I looked at De Leon and was beat before I even got in the ring. It was a great opportunity to fight for the world title, but I didn’t have the confidence and self-belief to back up my ability. I got a draw against one of the best fighters in the world, so in hindsight I did pretty well.”

Despite the draw, Nelson now felt that he needed a back-up plan. He attended university and studied recreational management, with the idea of teaching physical education. The ups and downs in his professional boxing career continued.

Nelson captured the vacant European championship by stopping Markus Bott in the 12th and final round in December 1990. Bott would subsequently test positive for steroids.

In May 1992, a second title shot against IBF belt holder James Warring ended in a wide decision defeat. Looking back, Nelson feels he hadn’t got over the De Leon fight. He wasn’t sure of himself and let the American’s camp hustle him and talk him out of the fight.

Nelson was at a crossroads in his career. He travelled to Germany and sparred some of that country’s top operators from the early 1990s: Axel Schultz, Torsten and Rudigier May and Henry Maske. He also boxed around the world in France, South Africa, Australia, Belgium, New Zealand, Thailand and Brazil with mixed success.

During that time, Nelson had to deal with racism, bribery to throw a fight and he was shot at by police in Brazil.

Those experiences instilled the vital self-belief that Nelson had been lacking. He started fighting at home again in 1996 with a completely new mindset.

“That was the best thing I could have done,” said Nelson. “Brendan knew it wasn’t a physical thing. It was a mental thing, so he had to build my confidence up. He had to make me decide if I really wanted it.

“It was a great experience, in and out of the ring, and it was a test of character. It gave me the chance to see all sides of boxing.”

In March 1999, Nelson received a third shot at fulfilling his dreams. He met countryman Carl Thompson for the WBO title and this time the challenger was a completely different animal.

“I had all the belief I didn’t have in the past,” Nelson said. “I had no excuses. I’d done everything for me to actually win. Now I expected to win.

“I knew Carl, mentally, hadn’t been where I’d been. He’s the kind of guy who wears his heart of his sleeve. I knew I had to rattle him. Physically, I couldn’t have done anything, but mentally I knew he was nowhere near my level.”

Nelson picked Thompson apart over five rounds to win the title. But he wasn’t done, and a remarkable 13 successful defenses followed. That record remains unsurpassed at cruiserweight, although German boxer-puncher Marco Huck did equal the run in 2014.

“I’ve not gone through all this shit to just beat Carl Thompson,” he explained. “I want a lot more than that. That’s why I was a champion who wasn’t going to get beat. I was a hungry champion.”

Just prior to facing Welshman Enzo Maccarinelli in March 2006, Nelson snapped the patella in his knee. The doctors, much to his disappointment, told him he’d never box again. A bereft Nelson exited the sport after nearly 20 years with a record of (45-12-2, 29 KOS).

“I would have liked to have fought Juan Carlos Gomez,” revealed Nelson. “Barring myself, he was the best. Another guy was IBF champion, Vassiliy Jirov. We boxed on the same card in Las Vegas. We trained at the same gym and I was watching him. I knew, at that time, I could have been unified cruiserweight champion.” 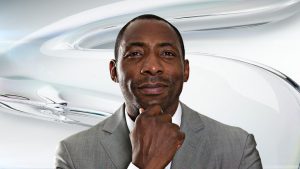 Nelson, now 51, is married with three daughters. He lives on a farm in Sheffield and works for Sky Sports as a boxing commentator and pundit. He enjoys horse riding and keeping fit. He is a patron for Sheffield MIND, an organization that helps people with depression. Nelson also visits schools and talks to the children about his life experiences and engages in motivational speaking.

The former long-reigning titleholder graciously took time to speak to RingTV.com about the best he faced in 10 key categories.

BEST JAB
Ruediger May: Rudy May came from the old school. He had a really fast, sharp jab. The problem was he was predictable. If you’re consistent and orthodox with your movement, what you do is predictable. Unorthodox fighters are the ones who give you hell-fire, because you don’t know what they’ll do next. The way to beat Rudy May was to control his way of thinking. Of all the sparring partners I had, he was the only one who sent me home with marks on my face.

BEST DEFENSE
Marcelo Dominguez: I had to be smart and sharp. His defense was awkward. You’d hit the arms. You’d hit the elbows. He’d bob and weave and slip the shots. He was there to be hit, but you couldn’t get off the shots you needed.

BEST HANDSPEED
Peter Ohoh: I know this sounds stupid, because I beat him and he was only a domestic fighter. I remember stopping him in the sixth, but he was lighter than I was and slinging shots. One time, he threw a shot I didn’t see and it landed on my chest. I thought, ‘Shit! I didn’t see that coming. If that had landed on my chin I’d have been gone’.

BEST CHIN
Corrie Sanders: I remember getting Corrie Sanders with one shot and it didn’t even make a difference. He just got pissed off [Laughs]. Dominguez could take a shot, ’cause I whacked him with some serious shots and this guy was going nowhere. I landed some beautiful uppercuts. He was tougher than I thought. (When I was) champion, I’d say Dominguez, otherwise I’d say Sanders.

SMARTEST
Dominguez: (As champion), I thought he was the most qualified of all the (challengers) I fought. He wasn’t a paper champion (Dominguez was a former WBC cruiserweight titleholder). His ring craft was very unassuming. You didn’t realize he was as good as he was unless you stood right in front of him.

STRONGEST
Vincenzo Canatore: He’d land those clubbing little shots to the back of the head. They seem like nothing when you look at them from the outside, but inside it was like getting hit by a block of wood. It’s a dirty trick but a clever trick, because it’s something the referee wouldn’t even realize was that bad. I tried to protect myself from that, but now and again he’d get a shot in and it hurt. Physically he was pretty strong. Up close he was solid.

BEST PUNCHER
Ezra Sellers: Ezra Sellers was taking everyone out. When he hit me, it wasn’t even a lucky shot (Nelson was down in Round 4). Ezra Sellers could either knock you out or be knocked out. He was one of those unassuming punchers where he had power in both hands. That was the worst kind of puncher; where you see it coming and he still puts you down.

BEST BOXING SKILLS
Sanders: Corrie Sanders was the most rounded fighter I’ve ever got in the ring with; the most skilled. You go to throw a jab, he slips and throws a southpaw left hand and you think, ‘Where the hell did that come from?’ Because I was fast and a defensive fighter, I didn’t really get hurt. He was hard to pin down as a heavyweight.

BEST OVERALL
Sanders: Dominguez was good. I thought Rudy May had a great jab. I thought Ezra Sellers had great punching power. Overall Sanders was very good. He was fast and he was sharp. Remember, I got in there with a heavyweight who was up-and-coming. You didn’t appreciate how fast he was for a heavyweight until you were there in front of him. He looked so easy to hit and that’s the mistake [Wladimir] Klitschko made.