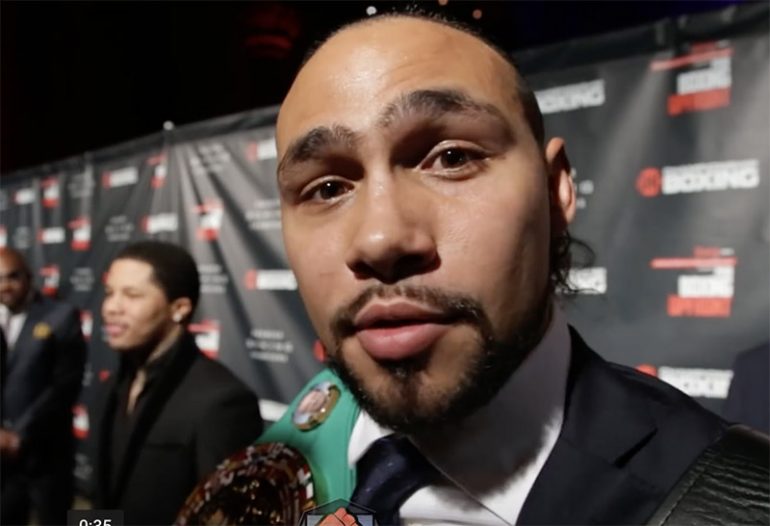 The splendor, the opulence, the aura of class and of Manhattan’s status as a world capital of business and media made the Wednesday presentation of Showtime’s first-half roster of fights stand out.

Now, I can’t speak to the quality of the eats (though I did see nattily attired servers strolling with trays loaded up with canapes at Cipriani on East 42nd St.), because I ran around like a minor madman trying to collect video interviews from the 21 boxers in attendance. But all in all, the session sent a message — a few actually — and will stand as an enduring memory to those who took part. Here are my top takeaways from the gala:

1) Keith Thurman Is Mayweathering —“One Time” is no fool, we know that, right? He’s not smart “for a boxer,” he’s smart period. And when he told me explicitly, no ifs or ands or buts, that he will not be fighting fellow young gunner Errol Spence in 2018, he made quite the impact. On social media, the hate was and is real. Thurman is truly “Some Time,” they shouted. Thurman don’t talk; he quacks. “Ducker,” they screamed. And guess what? He is — like Floyd did — going to up his leverage by making us beg to see the bout. And he doesn’t care if you don’t care for excess marinade in your meat. He will fight the Texan when he’s damn well ready. “You’re not gonna see it in ’18, baby,” he told me, point blank. “This is a get-back year; you’re not gonna be able to see it.” Let me fight TBA, then maybe a Shawn Porter or a Danny Garcia, he said. “EJ is to come in the near future, but not that soon.” And the Twittersphere blew up … and that many more people care about Keith Thurman and will tune in to his next fight. Maybe to see him lose, they hope, but they will tune in. Floyd’s influence lingers.

2) Showtime Makes A Run At P4P No. 1 —The network has laid a claim to being the industry leader in platformers, and that contention was made in NYC loud and proud. Stephen Espinoza told the assembled that all are not created equal, that Showtime is putting on meaningful fights — the best fighting the best — and no one is committing more monies and sweat equity than them. That’s for ratings and the fans to decide, I guess, if you care about such things. But the messaging was sharp and smart, and the ball is now in HBO’s court. How do they respond? Because this effort called for a response, arguably. Time and again as I took in the presentation, I found myself impressed mightily. The effort is real and appreciated.

3) No Sport For Old Men—I wasn’t sure what sort of format this thing would be in, but when Espinoza took to the mic, I got it. Really, this was a true “upfront” in that he wanted to impress upon pertinent people the strength of the schedule and why they should be cognizant of his brand and jump on the bandwagon. Now, networks are usually doing humble-bragging at these things in order to impress advertisers so that those advertisers will pony up and purchase slots. Showtime doesn’t do that, so when Espinoza told us that the sport actually attracts a MUCH more youthful demographic than assumed, he was talking to the media and the editors of the papers and websites and really everyone who falls for the old line that boxing is a niche sport suited for the Just For Men beard-dying set. Did you not know? Median age of boxing viewer is 49 … wayyyyy younger than for golf … and baseball … and pro wrestling … and college football. And younger than NFL and UFC, even. Anyone wanting to target blacks and Hispanics inside the sports realm, boxing is a great place to do it, he noted, with evidence. And younger folks … polling by the Washington Post shows that, broken down by age, interest is highest among the 18-29 set. NOT a sport for old men, we reiterate. Espinoza had slides to prove his point and left everyone (and this event streamed on Showtime digital platforms) feeling that much better about the long-term health and viability of the sweet science.

4) PBC Ya Later? — Al Haymon’s PBC has deviated from its original intention: to bring boxing’s golden age back to the fore by presenting the sweet science on free TV and up the eyeball count from the static place where it has been to where it stands again with the “big four” televised American sports. Dates on the networks have dipped for PBC, though, so many of us wonder where it stands today. Well, the brand is alive and well. Well … well enough? It’s hard to say, being that Haymon is averse to talking to media, so we don’t know his intentions or the monetary strength of his property. But I did notice that Premier Boxing Champions was beamed proudly onto the wall at Cipriani, high above where emcee Charlamagne the God spoke. Seems like PBC is co-branding with Showtime now, and that Showtime is telling us that most of their presentations will be from the PBC side of the tracks. Is that what Haymon and company envisioned when they set this up in 2014-2015? No. They rolled the dice and hoped for a takeover. The dice didn’t roll the way they hoped … but they are still in the game, so there are chapters still unwritten. The book isn’t closed.

5) Not A Milder Wilder —The WBC heavyweight champion is still perturbed that he’s not getting what he claims is his just due. Those present noted that welterweight Errol Spence was the first fighter invited to the stage — and maybe Wilder did, too. Maybe he expected an extra dosage of love and attention for himself and his March 3 fight against Luis Ortiz. Wilder is a good talker, and showed that again Wednesday. His game face was nasty and he promised that he’d “break Ortiz’s dreams,” while also pointing out that he knows that too many athletes are cheating and using PEDs. He speaks his mind, refreshingly so, and he can crack like a heart attack … but the masses haven’t come around to who he is and what he does. My take: His best chance at remedying that is to get that Anthony Joshua fight and drop and stop the hallowed Brit. Then Wilder’s ship will come in and it will be laden with the goodies he desires.

6) AB Still Attracting Butts Into Seats —Adrien Broner is an attraction. He can lose one fight, then another, but folks still want to hear what he’s going to say and tune it his fights. At this event, he drew the biggest laughs when he interacted with emcee Charlamagne the God. Sorry haters, AB ain’t going anywhere for awhile. He told us that “I’ve got a lot to prove; we’ve got to get back to where we was.” He hasn’t shifted off from where he was that much, he insisted. “Adrien Broner is still a household name … I’m stopping him,” he said of his next fight, against Omar Figueroa. He’d like to fight in Atlanta and isn’t sure his next fight will be in Brooklyn. “I’m fucking these niggaz up this year,” he promised. And yep, we will tune in to see if he’s proven right or wrong. Because he’s an attraction.

7) Floyd Still A Factor —He wasn’t there, but his right-hand man was. Leonard Ellerbe was in the house, repping Mayweather Promotions. He was there with Gervonta Davis, who a year ago was gaining steam as a short-lister on heirs apparent, but fell back some with out-of-the-ring issues. It looks and feels like Davis has his head screwed on straight again. But still, we wonder, what about “Money” himself? I put it to Ellerbe … I can’t help it, I find myself wondering: Would Floyd come back, come out of retirement again, and glove up against, say, Errol Spence? No way, said Ellerbe. “It’s not happenin,’’ Ellerbe stated. He came back for a massive event against Conor McGregor, but that was an exception. “Money” is happy to be retired, he insisted. Ellerbe mentioned Davis and Badou Jack, but Floyd … nope, not gonna see him again. Do you believe, friend? I think we do see him glove up again. Man is a competitor, and nothing beats the buzz and the payday of a megafight. Boxing is an addiction tougher to beat than heroin.