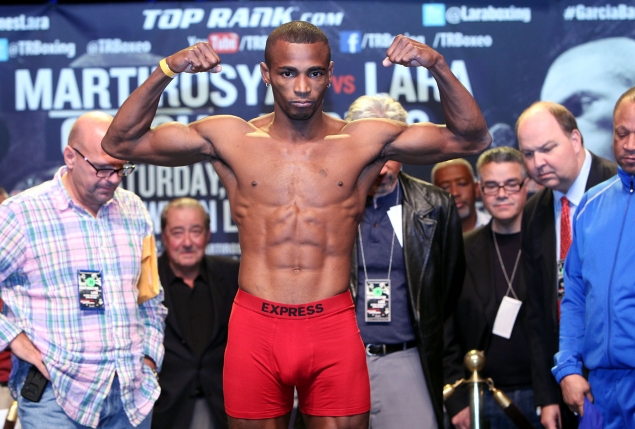 Erislandy Lara has long been panned for his aesthetically unpleasing bouts, but his next fight should cease those discussions, if only for a while.

It was announced Wednesday’s at Showtime’s event in New York that THE RING’s No. 1 junior middleweight will meet fellow titleholder Jarrett Hurd in a unification bout on April 7.

Lara (25-2-2, 14 knockouts) is coming off a lopsided decision over Terrell Gausha in October, the same night Hurd established himself as a force in the division with a stoppage victory over Austin Trout.

Hurd applies non-stop pressure, which should mix for the rare exciting Lara fight, who prefers moving and defense over standing in the pocket.

“I love that style matchup, and hopefully he puts the pressure on like [Alfredo] Angulo and I can leave his face the same way when the fight is over,” Lara told RingTV.com in November, referring to this action fight with Angulo in 2013.

” .. When I fight action fighters, I make good entertaining fights like I did with Paul Williams and Angulo. These young guys have to bring that out, and if not I’ll cruise to a decision. I’m the longest standing dog here and I’m going to keep being here.”

Hurd (21-0, 15 KOs) is confident he can indeed bring that out of Lara. The 27-year-old from Maryland is a big 154-pounder and will enjoy a four-inch height advantage over Lara. The hard-charging titleholder isn’t likely to use it, though, as he instead seeks to pressure the Cuban and break him down.

“Switching southpaw to right-handed, walking him down,” Hurd, THE RING’s No. 3 junior middleweight, told RingTV.com of his strategy. “And Angulo was a much slower fighter than I am, and not as big but constant pressure and constant awkwardness gave him so much problems before Lara landed that big shot and hurt his eye.”

For one night only, it appears fans won’t have an issue with the entertainment value Lara brings.