Lee Selby-Josh Warrington set for May 19 in Leeds, England 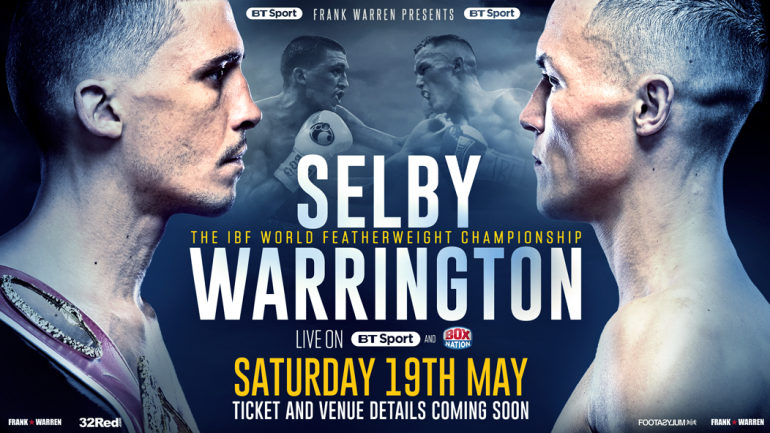 The eagerly anticipated all-British featherweight showdown between IBF titleholder Lee Selby and mandatory challenger Josh Warrington has been signed and sealed for May 19 in Leeds, England.

Selby, who is rated No. 4 by THE RING at 126 pounds, and Warrington, who is rated No. 10, have been embroiled in a long-running social media spat for years. The pair will now settle matters with fists and Selby is eager to get it on.

“Let’s see what Josh is made of,” said Selby (26-1, 9 knockouts). “He’s done everything that has been asked of him so far. He’s picked up my vacated titles and beat a lot of my past opponents. To his credit, he’s earned his position as my mandatory challenger and deserves his shot.

“If Josh comes steaming out like he has done in the past, that will just play into my hands as I’ll pick him off like I have done with numerous opponents. If he opts to box on the back foot, I definitely can’t see him outboxing me. In fact, there’s no way I can see him beating me.

“The plan is to beat Warrington and then go over to Belfast and beat (Carl) Frampton. If I beat Frampton then the world is my oyster. This is a huge year for me and by the end of it, I’ll prove to everyone that I’m the No. 1 featherweight in the U.K.”

Warrington (26-0, 6 KOs) is a former British, Commonwealth and European champion who believes that he has all the right stuff to go one step further.

“For the past three or four years our names have always been mentioned together,” said Warrington. “He’s always been that one step ahead of me and everyone has always looked at him as the No. 1 featherweight in the U.K., but that will change on May 19.

“It’s going to be an entertaining fight for the fans, but there’s only going to be one winner and that’s me. He’s not a perfect fighter or a polished fighter. He’s got a lot of weak points and I’m going to exploit them.

“The city of Leeds has been craving a world champion for years and I’m going to make history. I’m going to give absolutely everything to achieve my dream. I’m grabbing this opportunity with both hands.”

Venue and ticket details will be announced at a press conference in Leeds next week.