Spence states case for being best welterweight with Peterson TKO, wants Thurman showdown to prove it 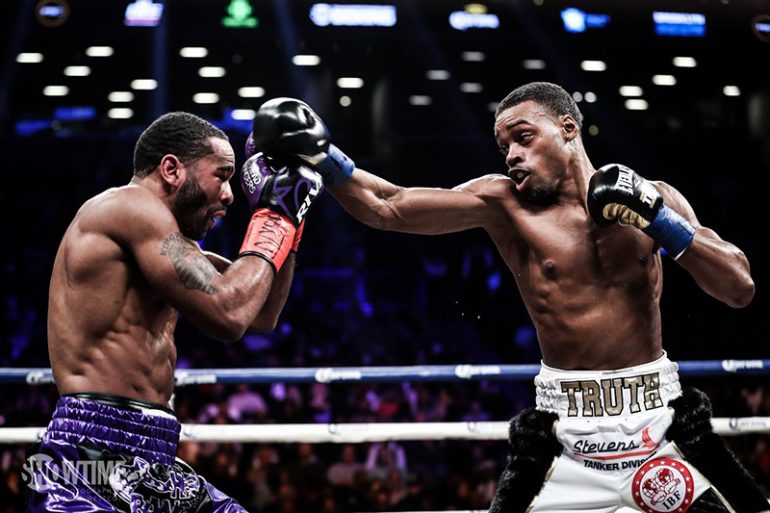 Errol Spence was relentless and technically brilliant during his systematic breakdown of Lamont Peterson. Photo / @ShowtimeBoxing
20
Jan
by Wallace Matthews

BROOKLYN, N.Y. – There came a moment late in the fourth round of Errol Spence Jr.’s IBF welterweight title defense against Lamont Peterson when it became obvious how this one would end.

With about 15 seconds to go in what had been a competitive round, Peterson, a 15-1 underdog with his back against the ropes, fired a right that caught Spence between punches and flush on the face. He could not have hoped to hit his man any better.

But instead of seeing his man fall to the canvas, or, in fact, show even a flicker of reaction on his expressionless face, Peterson’s shot was met with massive retaliation from Spence, who answered with a right-left of his own.

Certainly Peterson, who grew up homeless on the streets of Washington, D.C., has been in tougher spots than that, but in the moment, where he was, was not a good place to be. At that point, it became obvious that for Peterson, being in the ring with Errol Spence on this night was a classic case of wrong place, wrong time. 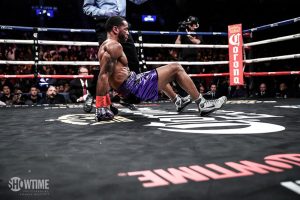 Peterson hit the canvas in Round 5. Photo / @ShowtimeBoxing

That was the beginning of the end, and unfortunately for Peterson, it was a long, painful ride home. Going about his business like a surgeon rather than a butcher, the immensely talented, and unnaturally poised Spence dropped Peterson in the fifth and battered him in the sixth and seventh until finally, mercifully, Peterson’s trainer, Barry Hunter, asked for the bout to be stopped as the bell sounded for round eight.

“It was really hard, but if you know Lamont, you know he was not going to give up,’’ said Hunter, who has been like a surrogate father to Peterson and his brother Anthony since they took up boxing as teenagers. “So I had to stop it. At the end of the day this is my son right here. And there’s nothing more valuable than his well-being. If it comes to him or winning, I pick him. I care about him.’’

It goes into the books officially as a TKO one second into the eighth round, but that hardly does justice to what Spence did to Peterson Saturday night at the Barclays Center.

“I didn’t know I would dominate like that,’’ Spence said. “I expected to get the knockout, but this was a great performance. We were facing a great fighter like Lamont Peterson and we did well in there.’’

Making the first defense of the title he won with an 11th round TKO over Kell Brook last May, Spence was both methodical and relentless in his abuse of Peterson. Working behind a piston-like right jab, Spence kept Peterson at a comfortable distance from the opening bell, occasionally dropping in his left hand to the body. A couple of those lefts strayed low and drew a warning from referee Harvey Dock, but no matter where they landed, they were doing damage.

And Peterson, four days shy of his 34th birthday and in his first fight in 11 months, seemed to have trouble getting untracked for the first two rounds. He finally joined the party in round three, scoring with several left hooks to the body and at least one good one to the head, but they had no discernible effect on Spence, who moved ever forward.

The fourth round was the turning point, when it became obvious that even with his best shot, Peterson could not dent Spence. But even after the fifth-round knockdown, from a left that landed high on Peterson’s head, Spence remained disciplined, which allowed a wobbly Peterson to somehow survive what felt like an endless final two minutes of the round.

Spence (23-0, 20 knockouts) stuck to his game plan in the sixth, pumping his jab, which raised a mouse over Peterson’s left eye. Meanwhile, Spence’s lefts to the head had reduced Peterson’s right eye to a slit.
“I could tell Lamont was wobbling before I got him down. It was just a great feeling to put on a strong performance.’’ 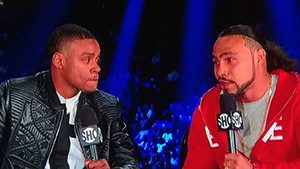 Thurman has never seemed enthusiastic about the prospect for facing Spence.

If nothing else, Spence’s performance justified his inclusion among the world’s best pound-for-pound performers, and buttressed his claim of being the world’s best welterweight. The ultimate showdown at 147 pounds, a fight between Spence and Keith Thurman, will have to wait until 2019, and assuming Thurman was watching, perhaps longer than that.

“Everybody knows I’ve been waiting on ‘Sometimes’ Thurman,’’ Spence said. “Since I was 15-0 I’ve been calling this guy out and he keeps making excuses.’’

Absent a Thurman fight, however, the logical next move for Spence would seem to be a fight with Danny Garcia, who suffered his only career loss to Thurman at Barclays last March.

Stephen Espinoza, the general manager of Showtime Sports, told RingTV.com that the U.S. cable network is reserving a June date for Spence with an eye toward Garcia as the opponent, provided the two-division champ defeats Brandon Rios on Feb. 17. Barclays Center is scheduled to host the JUne return of Spence, who remains focused on a unification bout with Thurman.

“I want Keith Thurman,’’ Spence said. “It’s an easy fight to make and I want it.”

But as Lamont Peterson so painfully learned, there’s nothing easy about a fight with Errol Spence.

In the semi-final bout, the announced crowd of 12,107 – which appeared considerably smaller — lustily booed the split decision awarded IBF lightweight champ Robert Easter Jr. over Javier Fortuna. It was an an interesting, somewhat sloppy bout between two willing but awkward fights. Easter (21-0, 14KOs) failed to use his significant height and reach edges to his advantage, and had trouble coping with Fortuna’s southpaw style and unpredictable attack. Easter won on two cards (115-112 and 114-113). The third card had Fortuna a 114-113 winner.