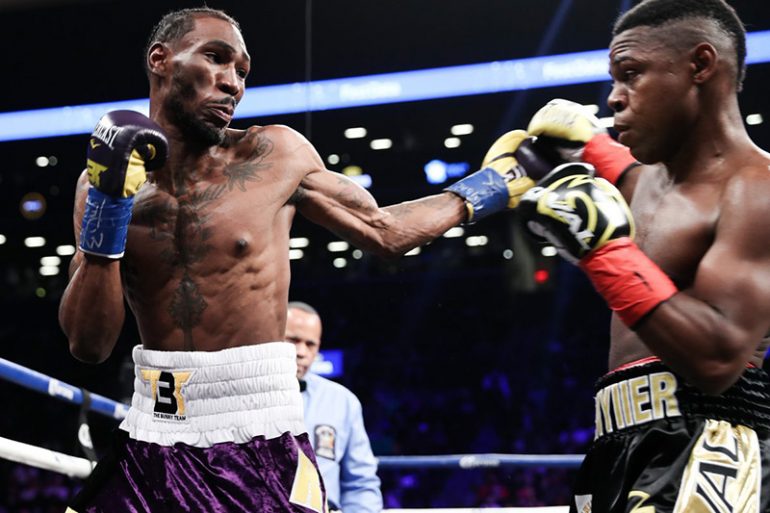 BROOKLYN, N.Y. — You could argue Javier Fortuna lacked some professionalism leading up to his Saturday night scrap against IBF 135 champ Robert Easter. But on fight night, he looked like a super-crafty ring general in what was no ebb-and-flow classic at Barclays Center and on Showtime.

Through 12 tight rounds, the lefty from the Dominican Republic made Easter miss a bunch and used a mobility edge while clutching and grabbing when he wanted to. Easter had a hard time with the sneaky Fortuna, who showed more energy and focus tonight in the ring than he did cutting weight for the weigh-in.

They went to the cards, and most of us chatting on press row admitted that we had no idea what the judges’ perceptions would be.

A point deduction for rabbit punching in Round 2 proved fatal for Fortuna.

The crowd disagreed, vehemently. They booed the decision … and booed loudly when Jim Gray interrogated Easter.

“It was a tough fight; he’s a former world champion for a reason. We made it tough trying to counterpunch. He wasn’t throwing much and it made it difficult for me to chase this guy around,” said the winner.

“I couldn’t get the knockout but we got the win and that’s all that matters. I knew he was going to run once he felt my power. He just wanted to grab and hold the whole fight.” The crowd didn’t dig this statement.

“I want to fight the champions and unify this belt. Fights like these aren’t in my game plan. I’m ready for Mikey Garcia and Jorge Linares to sign the contract.

“No one can beat me. He just ran and held all fight. I apologize that I didn’t get the knockout, but the win is all that matters.”

“The public knows what happened here. They booed because they know that I won this fight,” Fortuna said.

“If he’s a man, let’s fight again at 135 pounds. I will definitely make the weight. I didn’t give myself enough time to train.”

Fortuna melted to 136.4 only. Easter, word was, was extra irked at the scale fail, being that Fortuna had chirped loudly in the lead-up to the tango, promising to administer a beatdown on the Ohioan. He also had the temerity to offer up a throat-slash gesture at the weigh-in stare-down — more than mildly surprising after he stepped in the ditch on the way to the scale.

Easter trainer Mike Stafford told me on Friday that his kid would now be working with an extra edge, because Fortuna had dissed the game with his unprofessionalism and antics.

Fortuna has been on pretty big stages for a while. He beat Patrick Hyland in December 2012, followed by Miguel Zamudio. He then edged up in weight and found success until losing to Jason Sosa via TKO 11 in June 2016. Fortuna, promoted by Sampson Lewkowicz, won four straight to bring him to this point.

Not sure the number, but Easter (aka E-Bunny) drew a good number of fans, presumably most of them from Ohio.

In the first, Easter, possessing a huge height advantage, started smart and measured.

In the second, Fortuna got chippy and the ref took a point for rabbit-punching. He was shaking his head, yapping at Easter, looking like his confidence was high, at the end of the round.

In the third, E got started quicker. Fortuna did too, and he made Easter miss bad a couple times. They were clinch-y, finding a rhythm and tone. Fortuna now pressed more; he liked his chances on the attack.

In the fourth, Fortuna kept on being confident. He darted and moved smartly, clinched when he wanted to. Some boo-birds started chirping.

In the fifth, we saw more clinching. This tone was to Fortuna’s liking. The taller man wasn’t imposing his height and reach.

In the sixth, Easter wanted to come out harder. He closed distance some, but again Fortuna clinched up and stymied the champ. More boos with a minute left. Fortuna saw Easter loading up and was easily slipping launches. Then Fortuna scored, twice. A counter left after a right landed clean and earned him the round, arguably.

In the seventh, Fortuna was moving when and where he wanted. Easter told Fortuna to engage.

In the eighth, more of the same rhythm and tone. Fortuna was in charge of the pace and it looked like he was winning, to my ringside-ish eyes. To 9; Fortuna went down — nope, it was a slip. He was flurrying and getting out of range. Easter found the range better late … was Fortuna slowing down?

In round 10, we saw Easter flurry and clutch and almost fall. Fortuna was dictating the range and terms of engagement most of the time.

In 11, in tight, Fortuna was accurate and sharp. They were banging, face to face, not clinching. Tough round to score, as were many.

In the 12th, nobody managed to score a knockdown or knockout, so we’d have to wait and hope the judges saw a reasonable facsimile of what we did.