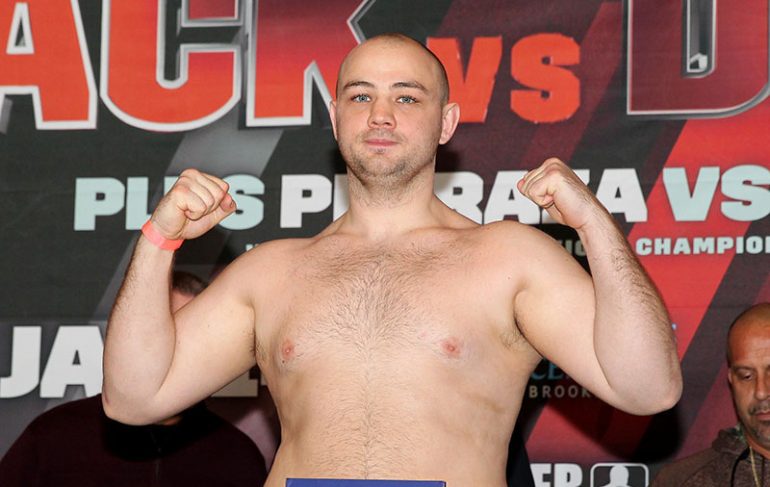 BROOKLYN, N.Y. – Heavyweight prospect Adam Kownacki defeated Iago Kiladze by sixth-round stoppage in front of a raucous Polish crowd on the Errol Spence Jr.-Lamont Peterson undercard at Barclays Center on Saturday. The official time of the stoppage was 2:08.

Kownacki (17-0, 13 knockouts), wiping away his own blood, caught a tired and spent Kiladze (26-2, 18 KOs) with a devastating uppercut in the sixth round, sending the Ukrainian fighter of Georgian descent walking backwards and unable to defend himself. Kownacki stalked forward and landed a flush right hook which dropped Kiladze to the canvas with a thud Kiladze tried his best to beat the count but referee Shada Murdaugh waived off the count and stopped the bout to no objection of Kiladze and his corner.

“I think I made the fight a lot harder than I should have,” Kownacki said following the bout. “It’s another learning experience and I got the win. That’s all that matters.”

This was the sixth appearance at Barclays Center for the Polish-born Kownacki whose traveling cheering section grows larger by the fight. Kownacki came into bout weighing 260 pounds which is 18 pounds heavier than he weighed last July when he destroyed fellow Polish heavyweight Artur Szpilka in four rounds in Long Island, New York. The victory over Szpilka and the manner in which he dismantled him elevated the 28-year-old Kownacki to prospect status and Kiladze was meant to be the toughest test for the three-time New York City Golden Gloves champion.

Kownacki came out aggressive in the opening round working behind his stiff jab and landing straight right hands. Kiladze landed a right hand of his own that blew open Kownacki’s nose splattering blood everywhere. Both fighters landed heavy right hands turning the bout in to a slugfest.

In the second round, Kiladze, who now lives and trains in Los Angeles under the tutelage of Freddie Roach started to move better and avoid Kownacki’s power shots. Kownacki was able to corner Kiladze on the ropes and they began to trade heavy shots again much to the delight of the crowd.

Both fighters tried to take a break from the relentless pace in the third round and Kiladze began looking as if he was about to run out of steam. Kownacki used his jab to get inside and opened up a cut just above the eye of Kiladze. Kiladze answers back with a right hand of his own causing Kownacki’s nose to leak blood again. The ringside physician took a close look at Kowancki’s nose before the start of the fourth round before allowing the bout the continue.

Sensing the urgency from his corner Kownacki began throwing bombs in the fourth round trying to end the night early for Kiladze, who moved well enough to avoid getting caught with many of the blows except for a straight right hand that connected flush and dropped him. Kiladze managed to get back up quickly and argued it was a slip instead of a knockdown but to no avail.

Kiladze tried again to use his movement in the fifth round to avoid Kownacki and tired the larger man out by making him miss on his power punches. Kownacki, although breathing hard, managed to stay disciplined behind the jab to get closer to Kiladze and in the sixth round had Kiladze hurt with straight right hands that landed flush thanks to his stiff jab. That jab helped set up the tremendous uppercut which ultimately ended the bout.

This was Kiladze’s third bout at heavyweight since moving up from cruiserweight. He was on a six-fight win streak since being knocked out in the second round by Youri Kayembre Kalenga in 2013 in Germany.

In welterweight action, Matthew Gonzalez improved to 3-0, 2 KOs, with a unanimous four-round decision victory over Alexander Serna (1-2, 1 KO). The official scores were all 40-36.

The 22-year-old Gonzalez from nearby Ridgewood, Queens was too fast and too busy for Serna who was off balance for much of the bout. Fighting in his hometown for the first time as a professional the former national junior golden gloves winner went the distance for the first time in his young career.

Dylan Price (5-0, 5 KOs) scored a second-round TKO victory over Nestor Ramos (7-8-3, 3 KOs). The official time of the stoppage was :05 of the second round when it was determined that Ramos would not be able to answer the bell and come off his stool.

The 19-year-old Price drilled Ramos with unrelenting power shots for which Ramos had no answer for. Price’s dizzying speed had the Mexican fighter hurt and on the ropes several times in the opening round getting a rise from the crowd. Following the round the ringside physician hovered over the Ramos’ corner and the decision was made to not allow the bout to continue.

This is the second consecutive appearance at Barclays Center for the New Jersey native who stopped Trevor Ballinger in the first round this past November.

Price, who was born in Philadelphia, enjoyed a highly decorated amateur career including being named the most outstanding boxer at the 2013 Junior Olympic Nationals. Price was not old enough to qualify for the 2016 United States Olympic team so he deiced to turn pro and sign with his idol Floyd Mayweather’s Mayweather Promotions. Price stayed busy with four bouts in 2017 to begin his professional career.

Peterson punished Florez to the body all night and had the Colombian fighter hurt several times in both the fourth and sixth rounds. Florez had one bright moment in the ninth round when Peterson was clearly taking the round off. Once Peterson woke back up he landed a scintillating left hook to the Florez’ body sending him back to towards the ropes. Peterson made an attempt to follow up with another combination but seemed content to allow Florez to survive the round.

The younger brother of Lamont Peterson, Anthony came off a 21-month layoff to easily dominate every round of the bout against the durable Florez who was in over his head. The 32-year-old Peterson now has amassed eight consecutive victories since suffering his only defeated in a disqualification loss to Brandon Rios in 2010.

The 24-year-old Okuth had some big moments in the second round stunning Williams and crowded him making the 20-year-old fight off the ropes. Williams was able to counterpunch well catching Okoth at will with clean right hands.