Underdogs Kiram, Gesta draw inspiration from past Thai, Filipino upsets at The Forum 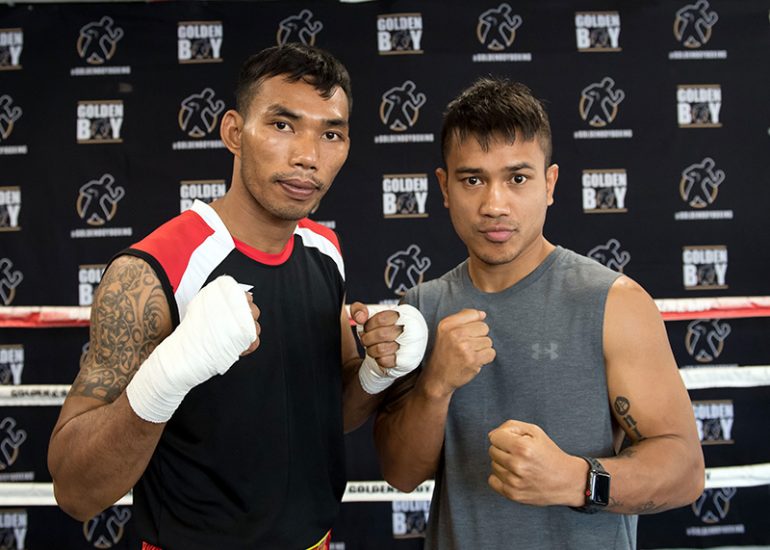 Underdogs Tewa Kiram (left) and Mercito Gesta stand side by side at a media workout prior their HBO debuts. Photo / Lina Baker/SeeYouRingside Photography
19
Jan
by Michael Baca II

The first HBO boxing telecast of 2018, a “Boxing After Dark” doubleheader featuring Lucas Matthysse and Jorge Linares in separated bouts, is meant to showcase the fan favorites into bigger fights in the near future. However, at a recent Los Angeles media workout, it was the dark-horse challengers who were given a chance to state their claims.

Thai welterweight, Tewa Kiram, and Filipino lightweight, Mercito “No Mercy” Gesta, walked into the Westside Boxing Club with little to no fanfare – much like the chances they’ll be given next Saturday (January 27) at The Forum in Inglewood, California – but if history bears repeating in the venue, these two fighters out of the Pacific Rim may be in good hands.

“I’m very happy that I’m coming to the same place that Saman Sorjaturong beat ‘Chiquita’ Gonzalez,” Kiram told RingTV.com through a Thai translator. Kiram, 25, was only three years old when his countryman upset Humberto Gonzalez at The Forum in THE RING’s 1995 Fight of the Year, but he certainly knew about the event when asked, and even watched the fight before making the trip to the United States for inspiration’s sake.

A virtual unknown in the U.S., Kiram has patiently worked his way up to being the WBA’s No.1 welterweight contender, and his fight with Matthysse is an opportunity he’s been waiting for the last eight years according to him. Before turning professional at the age of 15, Kiram was already seasoned in the fight game, and boxing was more or less a challenge he sought.

“After I became a champion in Muay Thai, there was no need to accomplish more, so I went to fight in professional boxing,” said Kiram, who had a total of 100 Muy Thai fights. According to Kiram, he started training for the sweet science at a Buddhist Temple, and felt well enough to forgo any amateur boxing experience before turning pro. In his sixth fight, Kiram was already partaking in 12-round bouts, and that’s when his long wait for big fight first began.

“He fights really well. I know he will come to fight, and that’s what I know of him,” Kiram said about Matthysse. “I don’t underestimate anyone. I don’t count my chickens before they hatch. I will show what I’m made of when I fight in the ring.”

Needless to say, there has never been a welterweight champion from Thailand, as Kiram is a rare commodity in a place where the smaller fighters of the world dwell.

“It is hard to find sparring partners and we have to pay them to come to Thailand,” he mentioned. Kiram has a well-proportioned physique, and will have a decent height and reach advantage against Matthysse. His strong, protruding cheek bones serve as a rugged indication that Kiram seems to be born for this whole fighting thing, but there’s no debating that the practicing Buddhist is peaceful outside the ropes.

In the ring with Filipino trainer JJ Jorda, Kiram had an unconventional way of hitting the mitts. Throwing what seemed to be nothing but power shots, the right hander gave off the impression that his style is a violent one, but he is no one trick pony.

“I can be a fighter. I can be a boxer. I’m a versatile type of boxer,” Kiram said about his fighting style.

On the heels of fellow countryman Srisaket Sor Rungvisai’s recent success in the U.S., and the mnemonic performance of Saman Sorjaturong 22 years ago, Kiram is in a good place being the 8-1 underdog against Matthysse.

Oddly enough, Gesta (31-1-2, 17 KOs) also has a harbinger of hope going up against Linares (43-3, 27 KOs), the WBA and RING Magazine lightweight champion, and it too involves “Chiquita” Gonzalez.

He too was only three years old when fellow compatriot Roland Pascua gave Gonzalez his first defeat back in 1990 via sixth-round knockout, and although he can recollect talking about the fight during his days in Cebu, Philippines, the 30-year-old southpaw was surprised to learn that it happened at The Forum.

“There’s always an upset, and there’s always things that happen. You don’t know what’s going to happen in the fight,” Gesta told RingTV.com when asked to give his thoughts on the coincidence. Slated as a 25-1 underdog, Gesta was well-aware that no one is giving him a chance against Linares, and staying in line with the historic theme, he referred to the greatest Filipino fighter of all-time.

“I know that. I’m the challenger, but it doesn’t really bother me at all. If he’s looking past me, that would be a great opportunity for me. It happens. Even when Manny first fought Barrera. Everyone thought Manny was gonna lose that fight, but actually it was the start of it all.”

Gesta does have past experience with Linares being a sparring partner during the Venezuelan’s tenure with Freddie Roach years ago, and given that Mercito is still under the tutelage of the famed trainer, he feels confident in his game plan.

“I think that really helps, and just the knowledge, technique and how to face Linares,” Gesta said. “I think it’s great that Freddie used to work with Linares. All I need to do is follow the game plan that they’re teaching, and what to do against Linares. I think it will help a lot.”

Along with Marvin Somodio – who held the mitts for Gesta’s media workout – Roach will be in his corner on fight night, but when it comes to this particular training camp, it has been the help of conditioning coach Justin Fortune that has made Mercito feel a real difference ahead of his first world title shot.

“I added more with my conditioning with Justin Fortune,” proclaimed Gesta. “It was actually the first time I did his conditioning the whole camp. In previous fights, when I was doing the conditioning in San Diego, it was only like two months before then I’d stop. With this one, I can feel different because Justin knows when to stop, when to slow it down a little bit but you still continue to condition yourself. I’ve felt the difference in the sparring. I’ve felt stronger later in rounds. That’s been the difference in this camp.”

Having reviewed the tape of Linares’ recent fights, and reflecting back on their sparring sessions, Gesta knows exactly what he’s up against on January 27.

“His speed, quickness and timing. He’s good at that,” Gesta said about Linares. “The power, I’m not really concerned about because I can take a hit. The quickness and the timing is where I need to be careful, study, and be smart in there. It’s kind of like a chess game in there where he’s watching me and I’m watching him too.”

Come fight night, the outlook of Kiram and Gesta’s chances probably won’t budge, but as “Chiquita” Gonzalez knows, that’s why they fight the fights.