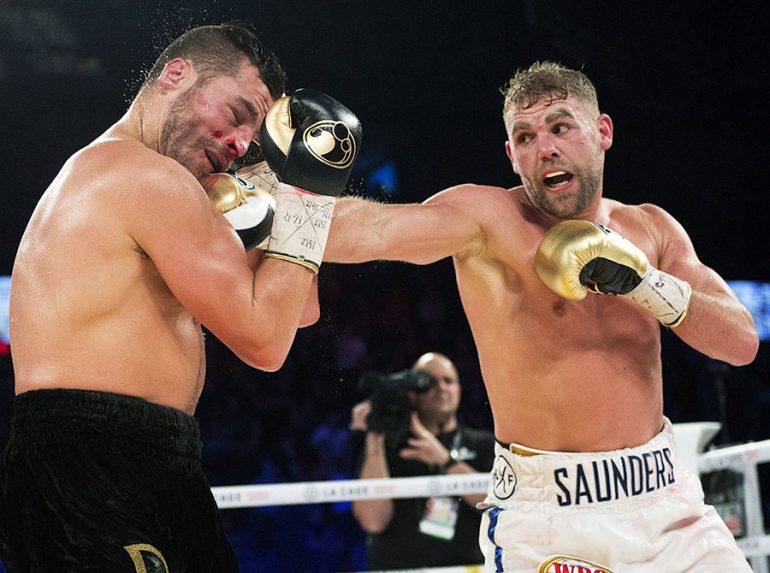 Saunders was on point vs. David Lemieux but Lemmy ain't Canelo. Photo by AP
19
Jan
by Tom Gray

Two of the very best fighters on U.K. soil will engage in separate world title bouts on April 14 at a venue to determined.

Billy Saunders, who is rated No. 3 by THE RING at middleweight, thrashed David Lemieux via 12-round unanimous decision last month in Canada to retain his WBO 160-pound title. The unbeaten southpaw now returns to the U.K. for a domestic clash against former four-weight world title challenger Martin Murray.

“Martin Murray is a good fighter and I have got the greatest of respect for him,” said Saunders (26-0, 12 knockouts). “But he’s in the way of what I’m aiming for this year and that is to become undisputed middleweight champion. He’s coming try and win my world title and I’m sure it’s going to be a good fight.”

Murray, who fell short against Felix Sturm, Sergio Martinez, Gennady Golovkin and Arthur Abraham in prior title bouts, still relishes the opportunity of fulfilling his dreams.

“I rate Billy Joe as a fighter; he’s one of slickest out there and he is coming off a great win and will be very confident,” said Murray (36-4-1, 17 KOs). “But I’m very confident this is my time to become world champion as it’s the only thing I have left to do. I’ve fought everyone and, in my opinion, at middleweight I have only one genuine loss against Golovkin, who is the best out there.”

Also on the card, Manchester’s Terry Flanagan will debut at 140 pounds in a fight for the vacant WBO junior welterweight title. The quick-fisted southpaw relinquished his WBO lightweight belt after making five successful defenses and will now face unbeaten American Maurice Hooker for a chance to become a two-division titleholder.

“Hooker is a very good unbeaten fighter; he fights on the back foot and looks to catch you from distance,” said Flanagan (33-0, 13 KOs). “However, I’m very confident I’ll be able to deal with anything he throws at me to become a two-weight world champion. Winning this fight will prove I’m a legitimate 140-pound fighter. I’ll be looking to unify the belts later in the year.”

Hooker (23-0-3, 16 KOs) is a natural junior welterweight who fights out of Dallas, Texas. Flanagan represents a serious step up in class.

“I’m looking forward to coming to the U.K. to fight Flanagan and to become world champion,” said Hooker. “We are both undefeated fighters and I’m sure it’s going to be a fantastic fight.”