No Lomachenko vs. Pacquiao, says manager, but ‘stay tuned’ 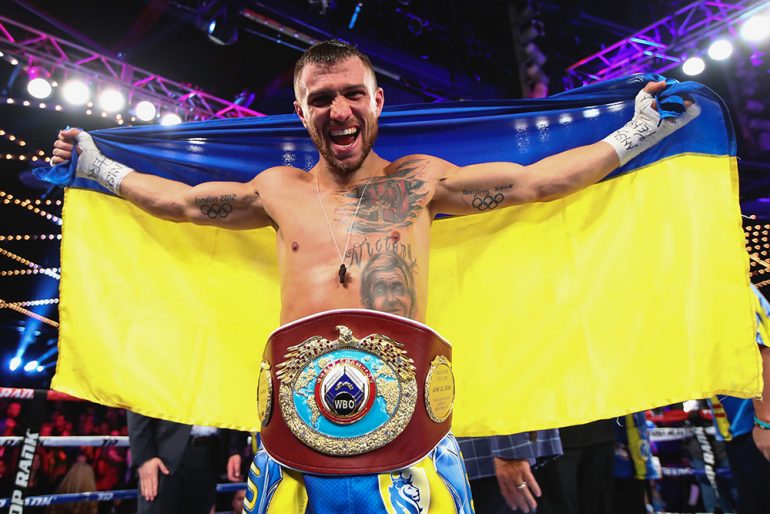 The chatter the last couple days has been about Manny Pacquiao vs. Vasyl Lomachenko — a superstar in the winter of his career vs. the younger gunner with fresher powder.

There seems to be appetite for it within the Manny camp, with Bob Arum and Freddie Roach and Michael Koncz and even Pacman himself talking up the concept. But what about Loma?

The Ukrainian, after dismantling and denuding Guillermo Rigondeaux Dec. 9, spoke of wanting to take on proper challenges, meaning in-their-prime boxers. Guys fighting out of weight class or a decade past their best days — that doesn’t so much impress him, he made clear.

That theme is being repeated by his manager, Egis Klimas, who threw a bucket of water on the aflame Manny vs. Loma chatter on Wednesday night.

So, who might fit the bill of “active champion in our weight class?” That class is 130, and the name that stands out to me is WBC titleholder Miguel Berchelt (32-1, 28 knockouts), who is listed on BoxRec as having a date to scrap, Feb. 10 in Cancun, against foe TBA. Is TBA Loma?

“No,” said Golden Boy (Berchelt’s co-promoter) president Eric Gomez. Feb. 10 will not see a Loma vs. Berchelt bout. TBA would be Cristian Mijares, he thinks. But, it turns out, Golden Boy’s options on Berchelt are done, and he’s being helmed by Zanfer. And Mijares, it turns out,  just was ejected or pulled out because of contractual elements.

OK, then. Alberto Machado holds the WBA’s strap; he needs a next, having last fought in October when he downed Jezreel Corrales and snagged the vacant bauble. Cotto Promotions helps Machado steer his career course. Are they putting the Puerto Rican in with the nimble-footed Ukrainian? Would Cotto do that business with Top Rank, and have their guy be the B-side on an ESPN card? I’d think maybe not. To be sure, I asked Bryan Perez, VP at Cotto Promotions. “Nobody has reached out to us about that fight, Machado versus Lomachenko. Right now, we are working in another direction.”

Better than me reading between the lines would be talking to Klimas, who helps plan the course for Loma. Klimas was kind enough to chat with me right after waking up on Thursday, even before he grabbed a cup of coffee. But his acuity was there; he wasn’t tricked into divulging anything top secret. I tried, LOL.

Egis, does Loma have a foe set for his next?

“I can’t give you names,” Klimas told me up front.

But, he did want to make clear, he would be happy to make it quite certain that Team Loma isn’t into a Lomachenko vs. Pacquiao fight at this time. He didn’t shut the door on it 100 hundred percent, but in April? Nah …

“Pacquiao is a very good, even legendary fighter … in the past. Right now the man is not active, he’s not the fighter he used to be,” Klimas said. “He is at the end of his career. He should be done with boxing, because he has other things to do. But I’m not the one to tell him what to do. Anyway, Loma is not going to take advantage of this situation because Manny is done. He is legendary, but we are not going to do stuff like stepping in the ring with old, done fighters just because he has a name.”

This is, of course, a time-honored tradition, setting up pass-the-torch fights in which we see if the old dog can elevate themselves one more time, put together the bark and bite they showed when they were a hungry pup. Klimas basically said that Loma doesn’t need or want to build his legacy that way: “It would be the same thing if we had Sergey Kovalev in with Roy Jones, and Kovalev would destroy Jones, who is a good name fighter but isn’t who he used to be.”

On the latest Fight Facts podcast, Joe Santoliquito mentioned high profile names at 130, “active champions” there, more than the ones at 130. To that end, I asked Klimas if we could maybe see a quicker move to 135 then we’d foreseen for Loma …

My three cents: Gentlemen, start those engines of speculation. See what’s out and about at 135, and who in that class might be a good style and political matchup for Lomachenko. Mikey Garcia, Jorge Linares and Robert Easter hold straps there, and all are more well known than Berchelt, Machado and IBF titlist Kenichi Ogawa. Now start pondering who might be likely to do a deal with Top Rank. Rev the engines and think and share your thoughts in our comments section.