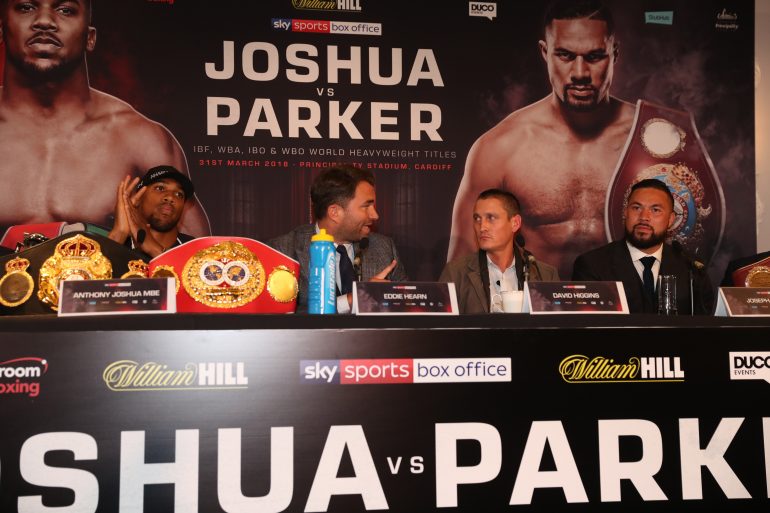 It was a press conference with a bit of everything.

Anthony Joshua and Joseph Parker met face-to-face in London on Tuesday ahead of their IBF, WBA and WBO heavyweight unification clash which will take place at the Principality Stadium in Cardiff, Wales, on March 31.

Joshua (20-0, 20 knockouts) won the IBF title when he stopped American Charles Martin in April 2016. The power-punching Englishman then added the WBA title to his collection when he halted former champion Wladimir Klitschko one year later.

Parker (24-0, 18 KOs) scored a 12-round majority decision over Andy Ruiz to capture the vacant WBO in December 2016. The New Zealander has made two successful defenses; outpointing Razvan Cojanu and Hughie Fury.

“I’m thankful we have this contract signed,” said Parker who spoke first. “I’m looking forward to going back to Las Vegas and training with Kevin Barry. This will be the hardest training camp of my life.

“I’m looking forward to this challenge. I know Joshua’s weaknesses and he thinks he knows mine. I’ll catch him on the chin and knock him out.”

Joshua, who opened as a prohibitive 6-1 favorite, is coming off a 10th-round stoppage of teak-tough Frenchman Carlos Takam in December. That bout was also staged at the Principality Stadium in front of approximately 78,000 fans.

“We’re making history. This is for another strap. We’re all blessed with the ability to work hard. But I mix intelligence with hard work. I’m looking forward to the physical and mental challenge.”

The event took a humorous turn when Parker’s promoter, David Higgins of Duco Events, took the microphone. For weeks, if not months, Higgins has stated publicly that Joshua has a “weak chin”.

Now confronted with Team Joshua and several members of the U.K. media, the promoter attempted to justify that stance.

“A lot of people think this is a one-horse race, but this is a 50-50 fight. Joseph has better hand speed, better feet, a better chin and he’s mentally tougher. What we know is that one guy has never been dropped (Parker) and one has (Joshua).”

At that moment, Joshua interjected: “The three times I’ve been hurt or dropped was the European championships (as an amateur) and I was unfit. My tank was empty and it’s hard to perform under those circumstances. I was just out a jail cell when I was dropped by David Price (in sparring) who is a big puncher. And the last time was by Klitschko.

“What I learned from those experiences is that it will take more than a human to stop me.”

Matchroom promoter Eddie Hearn took pleasure in teasing Higgins who appeared to hedge his bets when confronted by Joshua. It was all good-natured stuff, however, and there were no signs of things turning nasty.