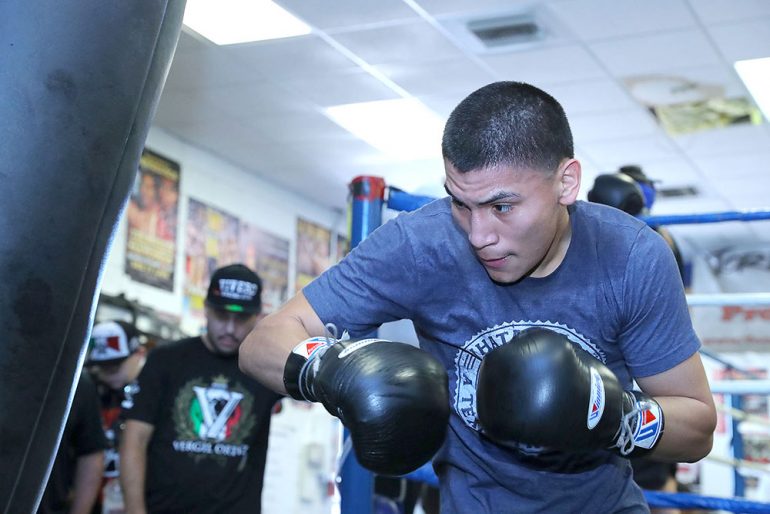 Coming off a breakout year in 2017, Vergil Ortiz Jr. will return to the ring on February 22 in the co-featured slot of a “Golden Boy on ESPN” card. The hard-punching junior welterweight prospect hopes to continue his streak of success that has opened the eyes of many.

“This year, for sure, I want to get a small belt,” Ortiz told RingTV.com on what his goals are for 2018. “I’m not looking for a world championship right now. Maybe late next year I can go for a title shot. I want to keep my goals realistic.”

At a recent media workout held at the gym of his trainer, Joel Diaz, in Indio, California, Golden Boy President Eric Gomez couldn’t help but remark on how Ortiz has grown not just as a fighter in the ring, but physically; offhandedly projecting his growing body could go as high as middleweight one day. Ortiz, who turns 20 in March, will first campaign at 140 pounds for as far as his body takes him, but aside from that, he credits the sparring he’s had with fellow stablemate Lucas Matthysse when it comes to his boxing development. 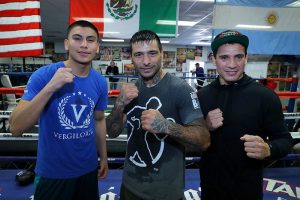 “Definitely the best I’ve sparred,” Ortiz said about the Argentinian veteran. “He teaches me when we spar. I’m a visual learner, and when he’s doing it on me, that’s how I like to learn.”

The language barrier isn’t an obstacle when it comes to picking the brain of Matthysse says Ortiz, who agreed that, in terms of boxing, there is a universal language they share amongst fighters.

“I like them all, man. I don’t have a favorite knockout,” Ortiz proclaimed when asked to pick one. “Favorite fight is probably my fifth fight. The fight that went three rounds. My first Vegas fight.”

Ortiz chose a night that really was the springboard to his success in 2017. It was his television debut and his first fight in Las Vegas on a big Cinco De Mayo fight weekend, but once going in depth about his KO of Angel Sarinana last May, there was more to it than just providing a thrilling knockout.

“It was my favorite fight because it taught me a lot,” Ortiz explained. “I’d always thought that I had to go into a fight and knock the guy out. That was the fight that really slowed me down from amateur to pro because I got really tired that fight. I tried to stop him in the first round, and I really winded myself out. In the second, I tried it again and it didn’t work. In the third, I settled down, and that’s when the knockout came.” 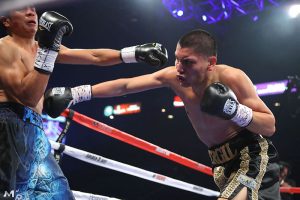 As it stands today, that fight is the only time Ortiz has seen the third round. One month later, he found himself back on an ESPN2 card – this time fighting in Frisco, Texas – just a few miles north of his hometown of Dallas. Ricardo Alan Fernandez barely lasted two minutes total in that one, and Ortiz went on to round out the year with knockouts of Cesar Valenzuela on the undercard of Canelo-Golovkin and rid himself of Evandro Cavalheiro within the opening minute of their fight in Cancun, Mexico.

Ortiz (8-0, 8 knockouts) won’t have to go far for his first fight of 2018. Just across the 10 Freeway at the Fantasy Springs Resort & Casino in Indio, the prospect hopes to prolong the momentum he’s built, and although his opponent has yet to be determined for February 22, Ortiz is also excited to fight toward an inevitable challenge.

“Oh yeah, I’ll love it when I fight tougher opponents,” Ortiz proclaimed. “It’s weird: I think it’s funny when I get hit. Well, not funny, but I think it’s cool. In the same fight, I got hit, and you can actually see me smile. I thought, this guy can really take a punch but he can give one too, so I thought it was pretty cool.”

The testing of a chin is usually an unanswered question when evaluating a prospect, and under the context of that subject, Vergil referred to the moments with his sparring partner in order to shed some light on where his chin stands today.

“I really like challenges,” said Ortiz. “It’s cool to win dominantly all the time, but I like a challenge. I don’t think it’s bad to get beat up, like in sparring. Recently when I’ve been sparring Lucas, he gives me a run for my money. He really does. He hits me a lot, more than I’ve been hit in years. Not only is he a hard puncher but he’s a smart fighter, and he knows how to get around your defenses. In my opinion, I have one of the best defenses: I can keep my hands up in the ‘numeral two,’ but he finds a way to get past it. He’s a real good fighter.”

If you’re wondering what Ortiz means by ‘numeral two,’ it’s his reference to the tight guard of his defense and, coincidentally, you will find that Roman numeral at the end of his name on his birth certificate, as “Junior” is nothing more than a marketing change. Fun fact aside, Ortiz was open about testing his chin in practice, and because he likes to stand there with his opponent and trade in sparring, his confidence continues to grow.

“I get hit sometimes when I don’t mean to, but I’ve been hit with the overhand and the uppercuts,” Ortiz revealed. “I haven’t been seriously hurt, but that’s been with the headgear and bigger gloves too, so it’s different.”

By the end of 2018, Ortiz may get the challenge he seeks, and if there is no such test in a real fight, he will surely progress under the guidance of Diaz and being around fighters like Matthysse. With a pretty solid stable under his tutelage, Diaz has no reservations calling Ortiz his best prospect today, and as for Matthysse, the welterweight contender gave the young prospect high praise when RingTV.com asked for his thoughts on his sparring partner.