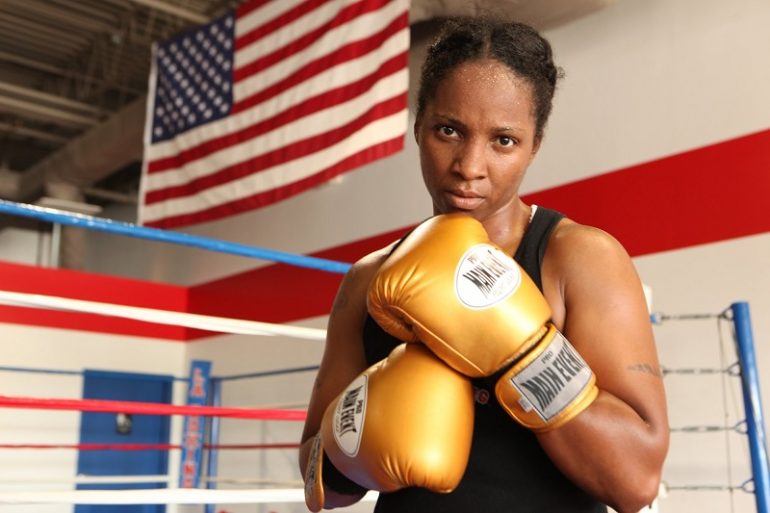 On Friday night, the smart money says Tori Nelson is in super-tough against Claressa Shields, at Turning Stone Resort & Casino, in Verona, New York, in the main event of “ShoBox.” But at least the violence will be structured, to which rules and regulations will be adhered. The same isn’t always so on an overnight shift the IHOP where Nelson sometimes works, in Ashburn, Virginia.

Of late, the 41-year-old single mother of two has been working day shifts, so she can hit the gym at night. Thus she hasn’t had to play waitress/ref, breaking up fights in the restaurant, as rowdy patrons fresh out of the clubs in the area get hopped up on too much maple syrup and start fracases.

Nelson chatted with RingTV.com as the days counted down to her face off with Shields, when she puts her 17-0-3 (with 2 knockouts) record on the line against the decorated Shields, who holds a 4-0 (with 2 KOs) mark as a pro, to go along with her two Olympic golds. Shields will come to the ring holding the IBF and WBC female super middleweight titles, to boot.

The takeaway on Nelson, a pro since 2010, was this: She seems to have an exemplary attitude and I’m guessing she will be in it to win it Friday, and doesn’t care much that Shields likely has a considerable skill advantage over her. Her attitude bleeds through, when she talks about the workload she deals with: two jobs, the kids, the boxing…

“Two jobs, that’s a blessing. I used to have three or four with boxing…but it’s a lot of stories I can tell about IHOP,” Nelson says, reflecting on the goings-on at the pancake parlor.

“This lady came in very rude and nasty towards me but I killed her with kindness, was very nice to her and, by the end of her meal, she had changed her attitude and she asked me, ‘Why are you so nice to me?’ And I said, ‘Because I treat people the way I want to be treated.’ She started crying and then she left a big tip.”

And there are some melees she’s had to break up too. “Brawls because no one had skills, they just wanted to throw punches and hit anybody,” Nelson says, chuckling.

Nelson’s mom lives in Southern Virginia; her dad is deceased. She has three brothers and took up boxing about 14 years ago, to lose weight, she shared. It was a love affair from the start.

She’d do it full-time, if she could, she continued. Of late, she’s gotten quality gym time. “Yes, by God’s grace, I have been off for a week and I just been in training and relaxing and doing all of the doctor appointments that I need to do for this fight.”

No trash talk from the avid church-goer, “I think Claressa is real good; she’s proven herself to be good.” But that isn’t to say she’s all about “turning the other cheek” and will show a saintly spirit in the ring…

“I’m not just fighting Claressa; I’m fighting her brand, Showtime, the people that so believe in her and I hope not but I’m pretty sure the judges too. My plan is to know that I have to stick with the plan that we have and to stay focused and to believe in the faith that Jesus is in me and I will beat her!”

I asked for her scouting report on herself and of whom her team is comprised. On tape, I saw a brawler, someone who likes to initiate contact, so Shields will have to be mindful of not getting caught, if nothing else.

“I guess my strength as a fighter is following directions from my corner and power. My weaknesses, I guess it is not waiting and being patient. I feel, if I’m in there, I want to be fighting. My main trainer is Craig Fladager; my assistant trainer is Pete Woodson, my promoter James Hogan and then I have, of course, my kids, that hold me to a higher standard, my son Qua’ Marque, we call him Q, and Simone…and that is Team Nelson.”

Prediction, please: Battling Nelson, for the feature bout on this Dmitriy Salita promotion:

“Me shocking and upsetting the world! A beautiful, blessed, well-deserved victory!”