At age 45, Lolenga Mock continues to fight – and win 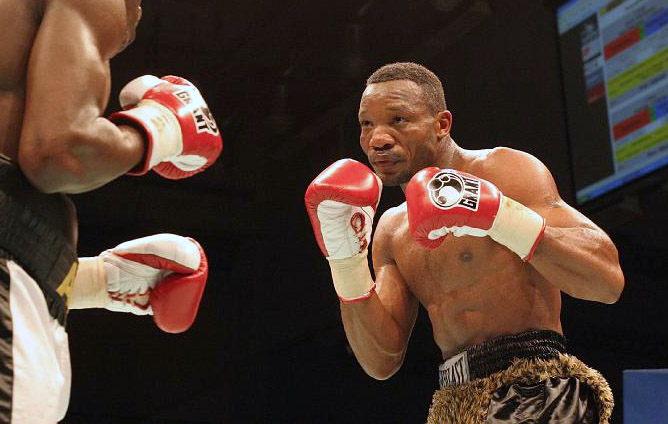 Lolenga Mock, aged 45 and in his 27th year as a professional boxer, earned what may be the biggest win of his career to date, a unanimous decision over Dmitrii Chudinov in Copenhagen, Denmark, on Friday.

Outboxing a world-ranked fighter 14 years his junior is cause to celebrate, but Mock already had plans for how he’d spend the rest of his night.

It’s that sort of modest living — eschewing smoking, drinking and night clubs in favor of time with his family — that he credits for his professional longevity. And it’s why, he figures, he was able to close the fight against the 31-year-old Chudinov (20-2-2, 13 KOs) the stronger of the two. Like an aging Ford that rides well once the engine warms, Mock started slow but built tempo, and by the later rounds it was Chudinov who was fading. Chudinov couldn’t find answers for Mock’s jab, and lost a point in the final round after his mouthpiece came out one too many times.

Chudinov entered the fight rated No. 8 by the WBA at middleweight and 15th by the WBC at super middleweight, and had only previously lost to Chris Eubank Jr. in 2015. Mock has now won 11 straight, all against opponents with winning records, and against two who were previously unbeaten.

Born in the Democratic Republic of the Congo capital, Kinshasa — site of the Ali-Foreman Rumble in the Jungle — Mock made his name in the early 2000s as a fearless fighter willing to fight anyone around Europe at any weight, going as high as cruiserweight to face David Haye — losing in four rounds but dropping the future heavyweight titleholder for the first time in his career.

When he decided to fight again after missing all of 2014, he admits there were many more detractors than believers in his mission.

“In the beginning, nobody was believing in me. They’re talking about my age always, but I have discipline for this sport. But now, I have convinced everybody. They’re getting shocked seeing me fight these young people and winning,” said Mock, who looks to Bernard Hopkins and George Foreman, fighters who had some of their best success later in their careers, as inspiration.

“Bernard, to get the big fights, he had to wait to the age I am now.”

Now, just three months before he turns 46, he’s hoping to not only enter the world rankings, but to get the title shot that eluded him in his younger days. He says his promoter, International Boxing Hall of Famer Mogens Palle, has promised him that is next.

“He promised me; he said, ‘You win this fight and the next will be a title fight,’” said Mock. He says his team had reached out to WBA “regular” super middleweight titleholder Tyron Zeuge before the fight, but did not receive a response from Sauerland Promotion.

Now he hopes to get that fight, or a shot newly minted IBF super middleweight titleholder Caleb Truax, or Eubank — or, frankly, anyone.

“There’s so many fighters at super middleweight. I’m ready for all of them,” said Mock.