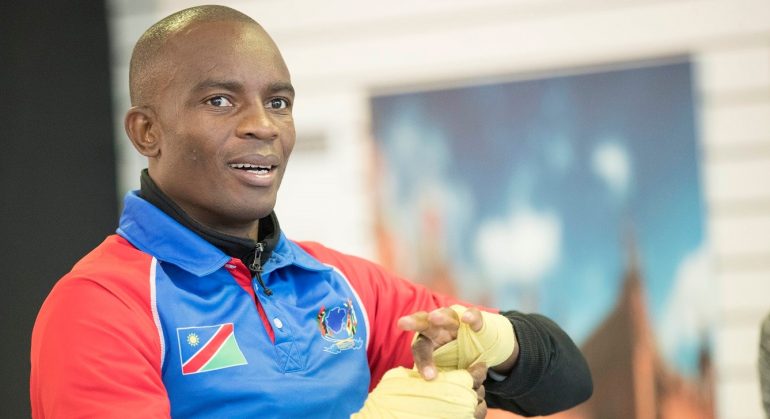 Julius Indongo lost his two junior welterweight titles to Terence Crawford in August, but with “Bud” now competing at welterweight, the division is wide open.

And Indongo is prepared to re-establish him at 140 pounds, armed with an American promoter for the first time.

The Namibia native signed with DiBella Entertainment, it was announced Friday, and Indongo is in position to make some noise.

“I’m very happy for the opportunity to fight for DiBella Entertainment,” said Indongo, THE RING’s No. 5 junior welterweight. “I will make sure that I work hard in order to open doors for my fellow Namibians. It’s an unexpected dream that turned into reality.

“DiBella Entertainment, I’m thrilled to continue my career and achieve my goals with your promotional push.”

Indongo (22-1, 11 knockouts) had fought exclusively in his home country until his 21st pro fight, when he travelled to Russia for his first world title opportunity. He certainly made the most of it with a first-round knockout of Eduard Troyanovsky. His very next fight, it was on to another continent for Indongo. And it was on to another title challenge.

The 34-year-old met Ricky Burns in Scotland in a junior welterweight unification match, and cruised to a 12-round unanimous decision.

Indongo’s third consecutive title bout didn’t go like the others. He met Crawford in August with all four belts — and junior welterweight supremacy — on the line, but was no match. Crawford knocked the southpaw out in the third round with a vicious body shot.

But with Crawford now competing seven pounds above, Indongo has a chance to reclaim his belts.

“I’m very excited to start working with Julius, not only is he a former unified junior welterweight world champion but also a true road warrior, winning titles in both Russia and Scotland,” said Lou DiBella.

“He’s very serious about becoming a world champion again, including moving his training camp to the U.S., and I look forward to working with him toward another world title opportunity.”