Devon Alexander, Victor Ortiz to meet in welterweight fight on Feb. 17 on Fox 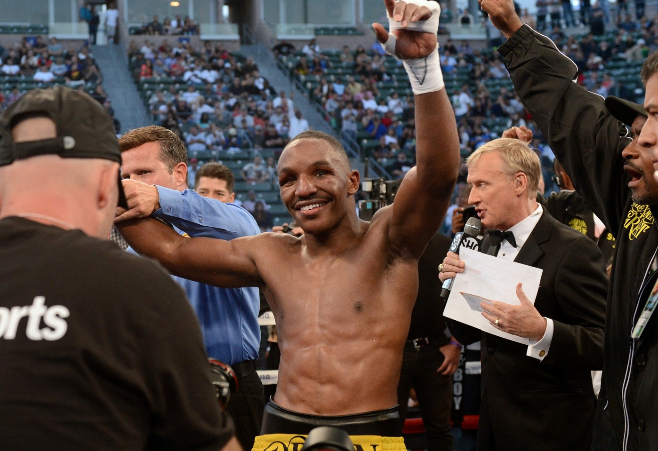 A fight between Devon Alexander and Victor Ortiz would have been highly anticipated at one point years ago, but now, they’re simply fighting to stay relevant.

Alexander returned after a long layoff brought on by painkiller addiction in November and looked sharp.

As he attempts to reclaim his former status as welterweight titleholder, he’ll meet another fighter looking to rejuvenate his career.

“I’m excited to get back in there against a fighter like Victor Ortiz,” said Alexander. “We’ve known each other a long time but never fought in the amateurs, so this should be interesting.

“My speed, quickness and smarts will win me this fight. Victor checks out sometimes when he can’t hit you, so my skills will be the difference. I’m ready for any challenge that’s brought my way. When I’m 100 percent, nobody can beat me.”

Alexander, 30, impressed with a 10-round shutout decision over Walter Castillo, his first fight in more than two years. The flashy combination punching which carried him to world champion status was on display, as were his fast hands and feet.

Before the comeback fight, Alexander was considered a finished fighter. After all, he had suffered three losses in four fights, none more disappointing to a decision defeat to journeyman Aaron Martinez in October 2015.

Alexander would battle painkiller addiction for the next couple years, and after a six-month rehab stint, he was cured.

Alexander and trainer Kevin Cunningham attribute the two-division champion’s struggles to addiction, and at 30, he’s hoping to re-establish in the loaded 147-pound division.

A win over Ortiz, a name fighter who is well past his prime, would be a nice start.

Ortiz hasn’t scored a notable win since a 2011 victory over Andre Berto to claim a welterweight title. Leading up to the Berto fight, Maidana had proven himself as a big, athletic puncher, if not one with questionable courage, in a shootout loss to Marcos Maidana and a draw with Lamont Peterson.

But after the Berto loss, he never won another meaningful fight. The performance did vault him to a big-money showdown with Floyd Mayweather, but Ortiz was sucker-punched in Round 4 and knocked out.

That defeat kickstarted a string of three consecutive defeats that included a stoppage defeat to Josesito Lopez after Ortiz’s jaw was broken by a punch, and then a shocking second-round knockout to Luis Collazo.

“I’m ready to give all I have to defeat Devon Alexander and get my crown back,” said Ortiz. “My priority is to make a strong comeback and putting myself in a position to have my straps once again. I demonstrated what I was made of and did what I said I was going to do in my last fight.

“I’m facing a great fighter in Devon Alexander and someone I’ve known since we were kids. I don’t hate him, but I will not be his friend on fight night and he won’t be mine. I’m ready to prove everyone wrong starting on Feb. 17.”

Oritz fought one more time a piece in 2014 and 2015 against low-level opposition, and then met Berto in a rematch in 2016. Ortiz was knocked out in the fourth.

Ortiz returned in July with a fourth-round KO of journeyman Saul Corral, and now, he’s apparently ready to face another top talent, even if it’s questionable how much Alexander has left, too.