Is Bivol-Barrera in jeopardy over PED testing? 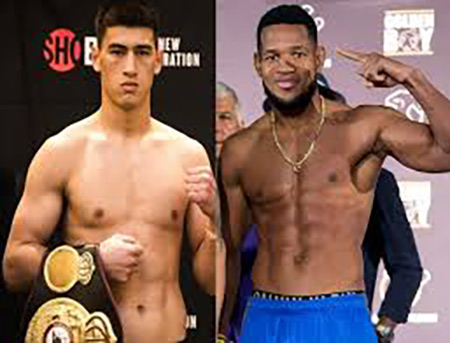 Boxing is slated to occur March 3 at the Madison Square Garden Theater in Manhattan, topped by a main event pitting light heavyweight top dog Sergey Kovalev against relative unknown Igor Mihalkin. Many boxing fans seem to be more enthused with the main support bout on that Main Events promotion, which has 175-pound contender Sullivan Barrera challenging young gun Dmitry Bivol, the WBA titleholder who is enjoying the buzz of being Maybe The Next Big Thing.

But, we wonder, is this bout, which has the WBA’S No. 1-rated Barrera, a Cuban native, against Bivol, last seen dispatching challenger Trent Broadhurst with ferocious efficiency on HBO in November, in jeopardy?

Barrera has taken to Twitter to try and hold Bivol’s feet to the fire, regarding PED testing. 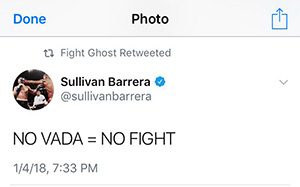 I messaged Barrera on Thursday evening and he told me he is doing VADA testing, and paying for it out of his pocket. He said that Team Bivol has dragged their feet on the issue, that they have taken “three weeks to say if they agree to VADA testing.”

He said he’d like for testing to be quickly agreed upon, so he can concentrate solely on training.

I asked promoter Kathy Duva to ask if she had any light to shed on the subject. She told me that Vadim Kornilov, who manages Bivol, has been on vacation. Ok, I answered, that’s maybe why he hasn’t responded to my query to him about testing. She too was trying to be on vacation, she continued, “But as far as I have been told, this has already been agreed to by Bivol.”

Noted; so, sounds like maybe it could get ironed out pretty quick and all parties can get down to the business of training, to fight, and not aiming, pee in a cup.