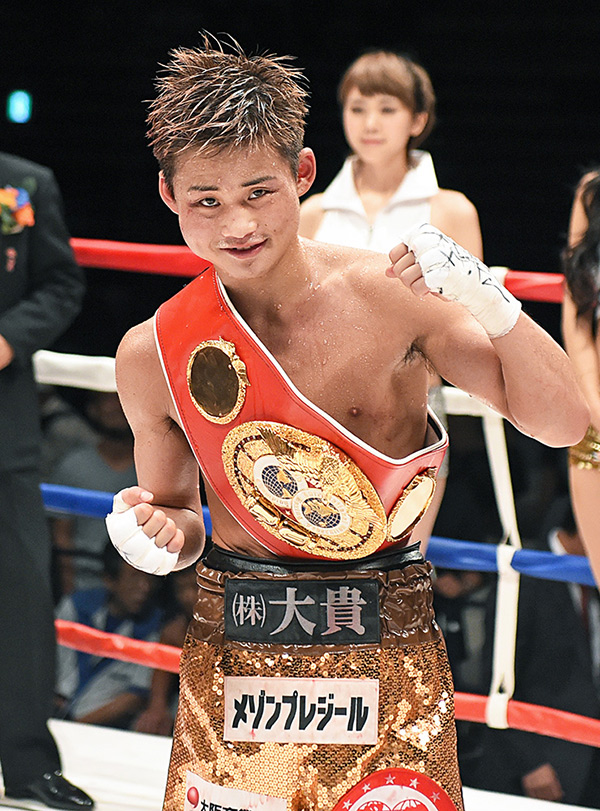 The Osaka native started the year as a six-round fighter and quickly jumped up to 12-round level, defeating Armando de la Cruz in three rounds to win the vacant OPBF belt, and then defending the regional belt with a unanimous decision over Jonathan Refugio two months later in April. Three months after that he was in his first world championship fight, outpointing Jose Argumedo to win the IBF strawweight title.

To finish it all off, he defeated Nicaraguan veteran Carlos Buitrago by eighth round technical decision Sunday at Ota-City General Gymnasium in Tokyo, Japan.

The 24-year-old Kyoguchi (9-0, 7 knockouts) used a persistent, digging left hook to the body to wear down Buitrago (30-3-1, 17 KOs), forcing a faster pace than would be comfortable for Buitrago after 14 months out of the ring. Kyoguchi stepped up the pressure on Buitrago by the third, landing flush right hands along the ropes which swelled Buitrago’s left eye, and mixed in left uppercuts that closed his other one.

A left uppercut propped Buitrago’s head up, and a follow right hand chopped it back down. With his right eye shut and his body weakened from steady shots to the body, referee Roberto Ramirez Jr. mercifully stopped the fight at 2:28 of the eighth round.

In the co-feature, Kimura (16-1-2, 9 KOs) retained his title in a brutal battle with his countryman Igarashi (23-3-3, 12 KOs), compelling the referee to stop the fight at 2:34 of the ninth round. Kimura, 29, won the title in July when he scored an upset stoppage of Shiming Zou in Shanghai, China.