THE RING Year-End Awards 2017: Finalists for ‘Knockout of the Year’ 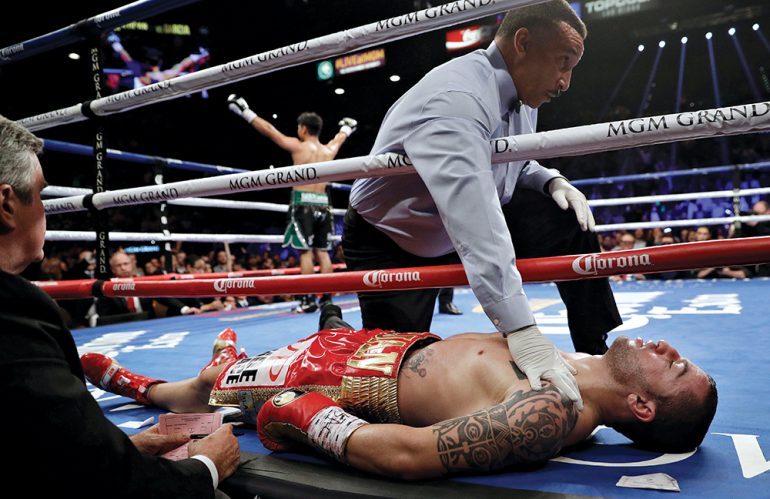 Garcia demonstrated against Dejan Zlaticanin in January that he was once again a fighter to be feared.
22
Dec
by The Ring

Leading up to revealing the winners, we will present nominees in two categories each day. As always, we would love to hear your opinions: Category 8: Knockout of the Year

David Benavidez TKO8 Rogelio Medina: It had been a rough night for Medina and it didn’t get any better in the eighth and decisive round. After a brutal series of body shots brought Medina’s hands down, Benavidez unloaded with a spectacular salvo of hooks from both sides. The final five punches landed inside one second in a finish reminiscent to a signature move on a video game.

Mikey Garcia KO3 Dejan Zlaticanin: Having not taken part in a world title bout for three years, many expected Garcia to be tested by unbeaten WBC lightweight titleholder Zlaticanin. That wasn’t happening. Zlaticanin dipped into a right uppercut-left hook combination which sent him stumbling into the ropes. Completely discombobulated, the stricken fighter was now a sitting duck for a massive right hook to the jaw. Zlaticanin out cold.

Joshua Greer Jr. KO6 James Smith: Greer backs up towards the ropes and when Smith loads up on the right hand, the Chicago-based puncher intercepts with a crushing right hand of his own. The shot lands with full impact on the point of the chin and Smith is out before he hits the canvas. Greer leaps on to the ropes in a corner with a prop pillow emblazoned with the words “NIGHT NIGHT #DontBlink”

David Lemieux KO 3 Curtis Stevens: If you hold your feet against Lemieux, then don’t expect any mercy. Stevens, seeking to counterpunch, edged back towards the ropes when Lemieux let fly with a straight right-left hook combination. The right landed, but it was the ridiculously short left hook which switched Stevens off like a lamp. The former world title challenger was out for minutes and had to be taken from the area on a stretcher.

Zolani Tete KO1 Siboniso Gonya: Gone in 11 seconds. Forty-nine seconds shorter than the movie title and a world record for fastest knockout in boxing history. Tete, the reigning WBO bantamweight titleholder, exploded out of the blocks, feinted a southpaw jab, before switching the shot to a right hook that knocked poor Gonya senseless. An extraordinary finish by a terrific talent.