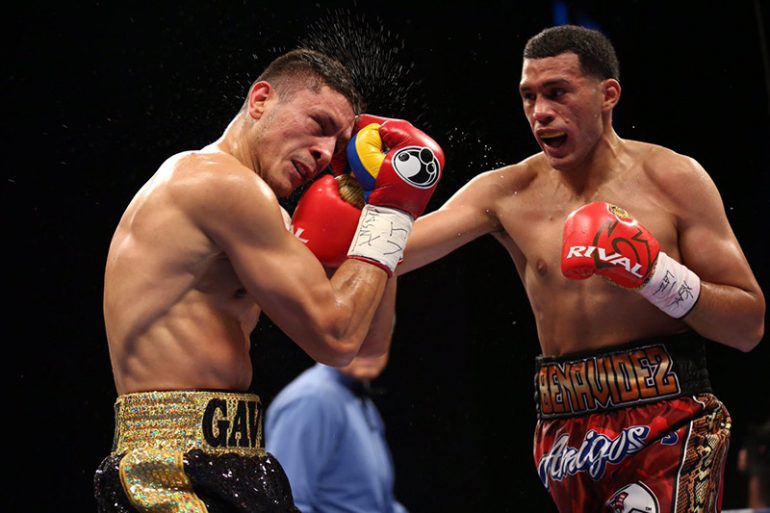 The youngest super middleweight titleholder of all time is ready for his first defense, and his opponent will be no stranger to him.

David Benavidez won the vacant WBC 168-pound belt with a thrilling decision victory over Ronald Gavril in September, and they’ll fight again on February 17 in Las Vegas. The rematch will serve as the Showtime co-feature to Danny Garcia-Brandon Rios.

Benavidez (19-0, 17 knockouts), the younger brother of welterweight Jose Benavidez, was heavily favored to take care of business against Gavril, but the Romanian surprised with his power punching and ability to land combinations.

Gavril (18-2, 14 KOs) dropped Benavidez in Round 12, but lost a split decision in a fight that could have gone either way.

“This is a fight that my father, my team and I decided to take again to show everybody that I’m really the champion and there’s more to me than just being the youngest world champion,” said Benavidez, 21, who recently relocated to Oregon. “I feel like I’m the better fighter and I’m going to definitely show it this time.

“I learned from that first fight that he puts on a lot of pressure. He likes to throw at the same time that I’m throwing. There are a couple different approaches to take against that. It’s going to be a great night of fights.”

Gavril lives and trains in Las Vegas at the Mayweather Boxing Club, so he’ll heave the hometown advantage, but he’ll have to put the performance of his life once again. Benavidez possesses some of the fastest hands in the sport, and his blinding six- and seven-punch combinations in a knockout of Porky Medina made highlights that went viral.

Gavril made up for the gap in athleticism with effective aggressiveness, and he felt he was robbed the first go-around. Now he has an opportunity to right perceived wrongs.

“I can’t wait to get into the ring again and take that belt,” said Gavril, 31. “I learned his game plan quickly during the first fight, I blocked it well then, and I plan to do the same again.

He has fast hands and power, I won’t take that from him, but I am prepared for whatever plan he comes in the ring with. I know I have what it takes to win this time. Preparing for this fight the second time around has been different, training has been more intense, and my team is preparing me to take him out once and for all. I can’t let him win. Some people said I won back in September, and were surprised by my performance.

“I thought it was close, and I thought the knock down gave me the advantage to win. All I can do is be ready. I don’t think either of us will upset the fans on fight night.”