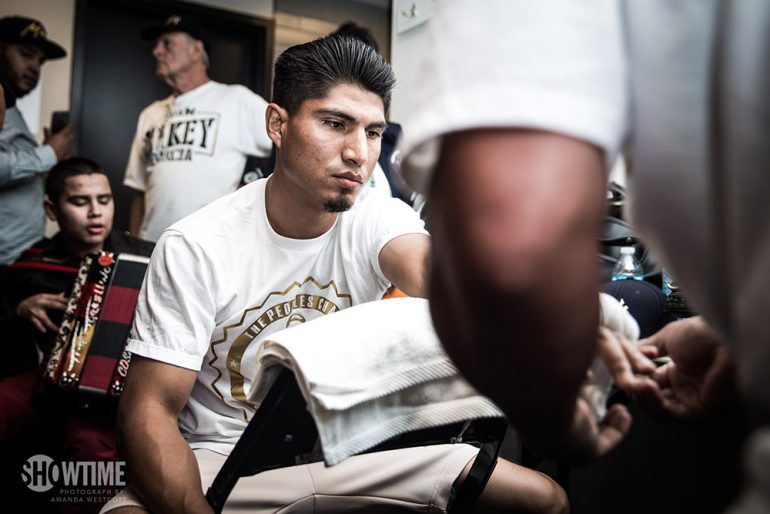 LOS ANGELES — Mikey Garcia wants to break through to pay-per-view, and he conceded he’ll need the proper foil to get there.

One such name: Vasyl Lomachenko.

The two-time Olympic gold medalist might just be the best fighter in the world, and he’s moving up to 135 pounds soon.

Of course, Garcia’s next fight will be for a 140-pound title against Sergey Lipinets on February 10, but the lightweight titleholder said he plans to return to 135 pounds for a summer bout against Jorge Linares. After that, Lomachenko could be on the table, but there are political complications, of course. This is boxing after all.

Garcia was promoted by Top Rank for years, through his two title reigns at 126 and 130, before the Southern California decided to part ways with Bob Arum and Co. Only it wasn’t so easy, and following a lengthy court battle that sidelined Garcia for two-plus years, he won his freedom and latched on with Al Haymon and Showtime.

Arum’s stable of Top Rank fighters — headlined by Lomachenko — fight exclusively on ESPN, and Garcia has doubts his proposed matchup with the 130-pound champ will ever materialize.

“The way I know Top Rank works, they’ll have someone else on the line for him to win a title at ’35 or maybe even ’40,” Garcia said Monday. “Most likely, he’s not going to want to face me because Bob won’t allow it.

“I think Bob Arum has been doing business so well for so long the way he runs his business, that it’s not in his best interest for him to face me with his fighters. Whether it’s financial reasons or taking a loss or whatever. I think he’s not going to be very excited to do business with me, but I know Lomachenko would take the fight and I would also take that fight.”

Garcia-Lomachenko is one of the true superfights you can consummate in the sport. It would pit two pound-for-pound entrants, and an intriguing style and size matchup. You have Garcia, the larger, power-punching fighter who might be slow of foot, but more than offsets speed with picture-perfect fundamentals and a tremendous ring IQ.

Lomachenko is the one with the blinding speed, and he’s come off the biggest win of his career, a six-round bout where he outclassed Guillermo Rigondeaux and forced the Cuban to quit on his stool. 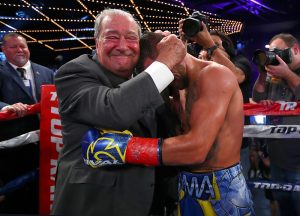 But even Garcia wasn’t too impressed with that victory.

“They want to see him fight bigger challenges,” said Garcia, 30. “He’s fighting smaller men and he himself doesn’t give himself that much credit for Rigondeaux for the size advantage. I’m moving up in weight, even though I’m a champion at ’35, because I do want that challenge. If he’s ready to move up to ’35, we can definitely do that. I know bob won’t say anything positive about that.”

Bob, in fact, believes Lomachenko would “make a joke out of” Garcia. At least that’s what the hall of promoter shouted moments after his man picked apart Rigondeaux on ESPN. Garcia has other ideas, of course. Hopefully, the differences of opinion are settled in the ring.

“I think I’d beat him,” he said. “My skills, my ability, my strength, my size advantage definitely helps me. He’s a great fighter, he’s got great skills but I want to see him fight guys at least in his division.

“Other champions like (Gervonta) David or (Miguel) Berchelt. Guys that are the same size and very talented as well — strong guys. I think he still has a chance to beat these guys but they would be a real challenge, not smaller guys.

“You can’t deny the skills, you can’t deny the speed or the footwork or the different angles. It’s there, you see it. Whether it’s a small guy or a bigger guy, he did it with (Nicholas) Walters too. You can’t deny that. But in order to give credit or more credit he needs to be facing bigger men or at least men his own size in his weight class to be able to get that credit.”

If the fight ever happens, whoever prevails will earn massive credit, there’s no doubt about that.