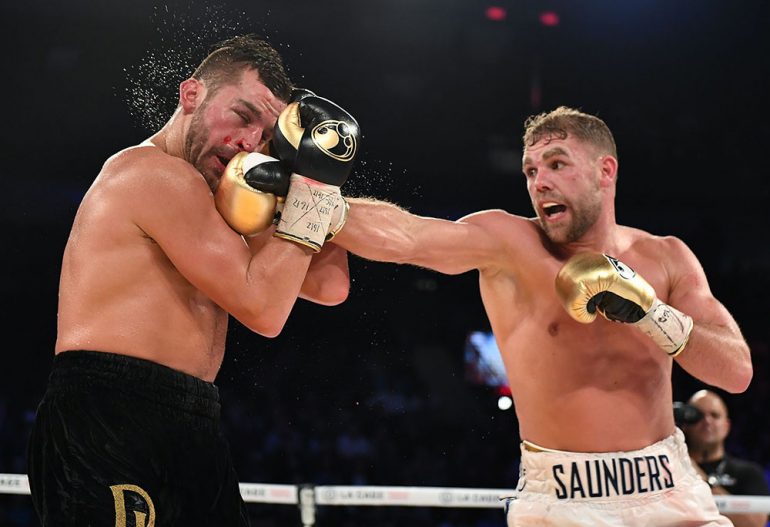 We went into the Saturday night HBO show thinking, many of us, maybe in retrospect with an air of wishful thinking, that all three fights were of the coin-flip variety.

And we got answers…

The 28-year-old Lemieux wasn’t able to activate his power edge in the least. Douglas might have had too much taken out of him in previous fights to be able to realize the potential he exhibited three years ago. And Seldin looked to be on another (lower) level than Ulysse in his second bout in a month.

None of the three fights really achieved exclamatory lift-off but such are the breaks. We can see what we see on paper, but the fights have to be fought before we can truly KNOW.

Discussion in the immediate aftermath of the Brit Saunders’ exemplary display of skills and strategy centered on Lemieux quite a bit. The Canadian wasn’t in the fight from the get go, and so it left us wondering why. My first thought was: is he having too hard a time making 160?

Eric Gomez, the Golden Boy Promotions president, told me Sunday that he thinks Lemieux will stay at 160. “But I haven’t talked to him about it,” Gomez told me.

As for Saunders, what did Gomez think of his showing? “Solid performance but not a crowd pleaser,” he said.

I don’t disagree; BJ is a hard risk-reward challenge. He is so attuned to being defensively sound that offense is not really his first area of focus. And yes, most boxing fans and those all important casuals we need to snag to grow the fanbase put a high premium on entertainment value and that is easier to achieve by being an offensively oriented pugilist than in being the sort of ring general Saunders is. If I’m a promoter or matchmaker or manager, I ponder heavily before I put my guy in with Saunders, because he is a very good boxer who is hard to look good against, especially when he’s in shape and mentally dedicated to the sport.

“It was a hard style to fight for David,” Gomez continued. “Chasing all night is tough.” Also, as Lemieux noted in the post-fight interview in the Montreal ring with Max Kellerman, he hurt his left hand in round two and that affected him. Gomez said he didn’t know if there was a diagnosis, he was flying home to Cali on Sunday morning and hadn’t received word from Team Lemieux.

On social media, many commented that they didn’t think Lemieux looked stellar, body-wise. No, he didn’t look ripped. Gomez said he has a strength and conditioning coach already, so there’s that.

Bottom line, he and his team will be looking, I think, at all elements that contributed to this showing being less than optimal for the 38-4 hitter, from this being not a superb style clash for him, to how he’s cutting weight and re-hydrating, etc etc.

This Sunday isn’t an easy one, I don’t think, for all three guys who took the L last night. Lemieux under-performed, Seldin’s moon-shoot ride last month came back down to earth at same speed and Douglas could well be questioning his worth and future in this rarely sweet and more often savage sphere. Your three cents, my friends? What are your takeaways from the HBO Canada card?