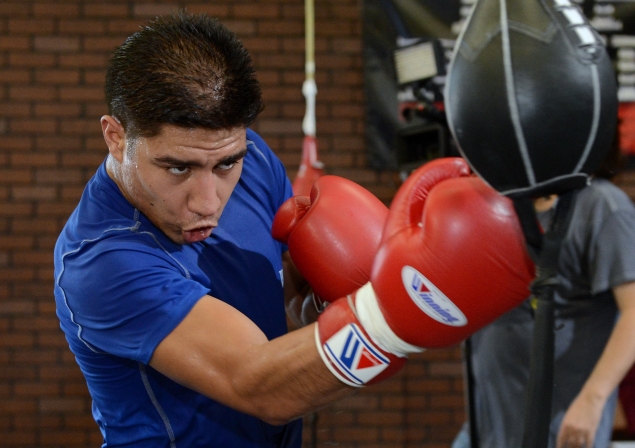 LANCASTER, Calif. — Fighting at the gymnasium-like Pioneers Event Center some 70 miles outside Los Angeles, the home of Division III University of Antelope Valley, is a far cry from the likes of the Thomas & Mack Center in Las Vegas, the site of Jessie Vargas’ last fight.

That was when Vargas was a welterweight titleholder defending his belt against the great Manny Pacquiao.

On Friday, he returned for the first time since that setback in front of hundreds, rather than several thousands, and shook the rust from the 13-month layoff with a unanimous decision win over journeyman Aaron Herrera.

He’s with a new trainer, hall of fame fighter Mike McCallum, and he’s no longer promoted by Bob Arum and Top Rank. Instead, Vargas is now linked up with Al Haymon, and the comeback fight was the main event of the final Premier Boxing Champions card of the year, this one on FS1.

“I feel great, I feel fantastic. To be honest, I feel like I needed to shake off the ring rust. Thankfully, we did just that,” Vargas, 28, told RingTV.com. “Keeping the timing, keeping the distance. All we had to was combine it a bit more, and the minute we did, we dropped him.

” … (My jab) was very effective, I felt it very stiff. It was landing very accurately, I think that’s what kept him off.”

A series of left hooks dropped Herrera (33-8-1, 22 KOs) in Round 6, and it was target practice for Vargas all night. The former two-division titleholder sticked and moved with his excellent jab and finally began to sit down on his punches in the sixth. He admitted he was trying to get rounds in after the long layoff, but also wanted to finish the Mexican once he had him on the canvas.

The knockout never materialized, but Vargas, THE RING’s No. 10 welterweight, is back and ready for much bigger assignments in 2018. He hopes to return as soon as February, and would relish the opportunity to face unified welterweight champion Keith Thurman, who is scheduled to come back in the spring after undergoing elbow surgery.

*In the televised co-feature, Jamal James scored a career-best victory with a third-round knockout of Diego Chaves. James has now won two straight victories (the other over Jo Jo Dan) since the first loss of his career, a decision defeat to Yordenis Ugas in August.