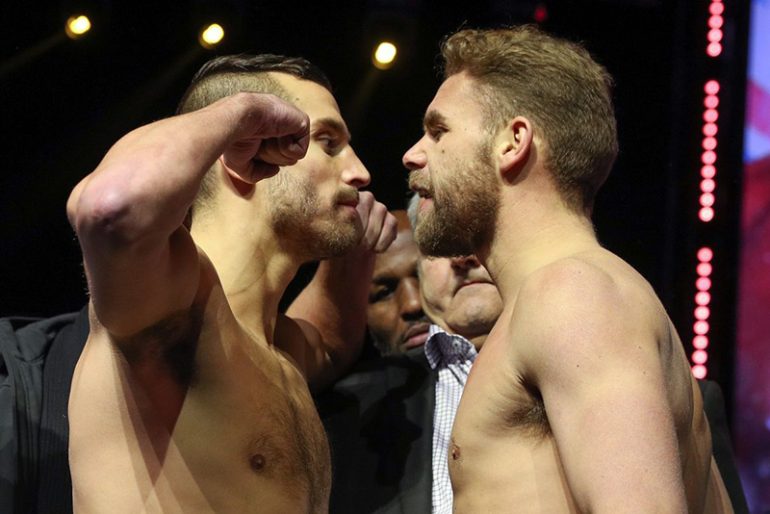 LAVAL, Quebec — WBO middleweight titleholder Billy Joe Saunders and David Lemieux weighed in at the division limit of 160 pounds on Friday at Place Bell Arena in Canada, the site of their anticipated showdown on Saturday.

The boxer-puncher matchup, which will be televised live on HBO in the U.S. and on BT Sport/BoxNation in the U.K. (and available via PPV in Canada), is a bit of a grudge fight as Saunders (25-0, 14 knockouts), a 28-year-old southpaw from England, and Lemieux (38-3, 33 KOs), a 28-year-old former IBF beltholder from the Montreal area, have gone at it on social media and during Thursday’s final press conference.

Some of that fire was seen at the weigh-in, as Saunders and his trainer, Dominic Ingle, loudly claimed that a stripped-down Lemieux was over the 160-pound limit after the local fighter first stepped on the scale. Lemieux obliged them by stepping on the scale again, weighing 160 on the dot, and stepped off while flipping them his middle finger.

Saunders stepped on the scale nude to, in his words, “keep it fair” to Lemieux, who he repeatedly called “p__sy boy” during their time on the stage. It wasn’t the classiest exchange of words but the two prime middleweight standouts are expected to put on a world-class boxing match.

Middleweight fringe contender Gary “Spike” O’Sullivan weighed in at 158.8 pounds for his scheduled 10-round co-feature against former prospect Antoine Douglas, who weighed in at 159.2.

Junior welterweight up-and-comer Cletus Seldin, who fights in the opening HBO bout against Yves Ulysse Jr. just one month after his making his HBO debut, weighed in at 141.6. Ulysse, a Montreal resident who stopped fellow prospect Zachary Ochoa in March but is coming off a 10-round decision loss to veteran Steve Claggett in October, weighed in at 141.2.