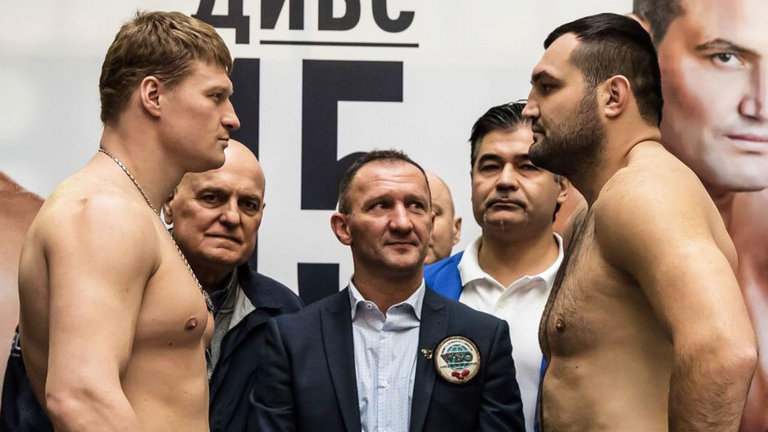 Povetkin, who is ranked No. 4 by THE RING at heavyweight, expects his German-based opponent to put up a good fight. The 38-year-old veteran tipped the scales at 223 pounds, while Hammer came in at 245 at the official weigh-in.

“I think the fight will be interesting,” Povetkin told RingTV.com through a translator from Russia-based promotional outfit World of Boxing. “He is an attacking fighter and I like that kind of boxing.”

Povetkin (32-1, 23 knockouts) prepared himself initially in the Kislovodsk mountains and then at home in Chekhov. During that time, the Russian boxer-puncher sparred with Erkan Teper and Adam Kownacki among others.

The Olympic gold medallist from Athens 2004 refused to cast his gaze over the heavyweight landscape and is not looking past Hammer.

“Now I am fully focused on the upcoming fight,” Povetkin said. “After that I’m ready to face anyone; ready to face the best in the division.”

Hammer, the younger man by eight years, is now unbeaten in 17 fights. Earlier this week, a February 2015 defeat to Tyson Fury was changed to a no-contest when UKAD concluded their investigation into the Englishman’s alleged use of PEDs. Hammer will now enter the ring with a record of 23-3 (12 KOs).

A shadow was cast over Povetkin’s career after he failed two drug tests last year. A scheduled fight with WBC titleholder Deontay Wilder was cancelled, as was a bout against contender Bermane Stiverne.

Povetkin was fined $250,000 and suspended from WBC fights indefinitely. However, he remains steadfast that he is innocent.