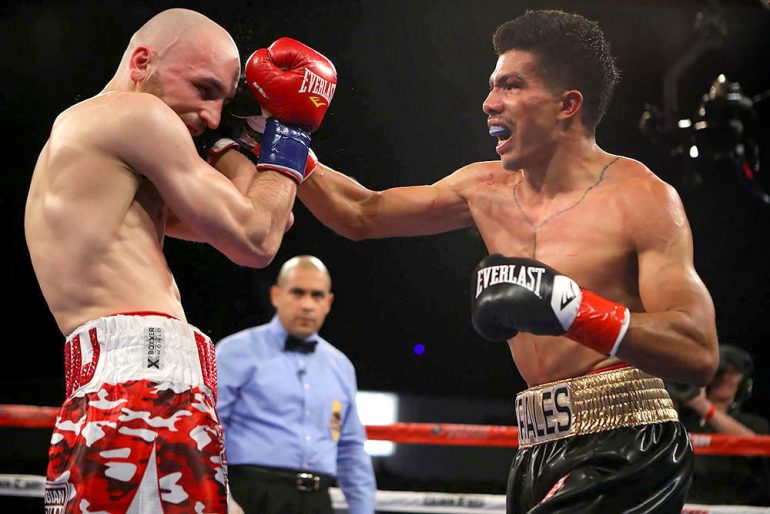 Carlos Morales may have won on the scorecards Thursday night, but his sixth-round technical decision over Dardan Zenunaj at the Fantasy Springs Resort Casino in Indio, California, left many questions unanswered.

Not to mention the need for a rematch.

It was a crossroads bout between two fighters trying to get their careers on track. Morales had lost by unanimous decision to Alberto Machado in his previous fight, while Zenunaj had split his previous four bouts.

From the opening round, Morales was the more effective fighter, repeatedly connecting with straight, counter right hands to the head. During the first three rounds, Morales stunned Zenunaj a handful of times.

Momentum seemed to shift during the fourth round when an accidental clash of heads opened a significant cut over Morales’ right eye. After the ringside physician allowed the fight to continue, Zenunaj pressed the action, going on the attack and forcing Morales to fight off his back foot.

Zenunaj’s best round was the fifth, where he let his hands go and connected with more frequency as Morales’ punch output dropped.

At the start of the sixth round, the ringside physician again checked on the cut over Morales’ right eye. After consulting with the physician and Morales, referee Raul Caiz Jr. stopped the bout. Because the fight was stopped on an accidental cut, the fight went to the scorecards, where all three judges scored the bout 49-46 in favor of Morales.

Each fighter gave a different account of the result.

“He kept coming in with his head,” said Morales (17-2-3, 6 knockouts), who resides in the Los Angeles neighborhood of Highland Park. “I couldn’t continue with the fight. I was seeing double and I had blurred vision.

“He has no honor,” said Zenunaj (14-4, 11 KOs). “It’s a shame. When I come to the ring, I’m prepared to die. If you’re scared about death, maybe you shouldn’t do this. He was getting tired. He couldn’t breathe. My gameplan was going to get him after the fourth, fifth round. I was sure I was going to knock him out.”

Curiel (2-0, 1 KO), who represented Mexico in the 2016 Olympic Games in Rio de Janeiro, dropped Villela once in the third and once more in the fourth round. After Villela beat the count in Round 4, his corner threw in the towel, prompting referee Jerry Cantu to stop the bout at 2:23.

All three judges scored the bout 60-54 in favor of Esparza, who improved to 4-0.