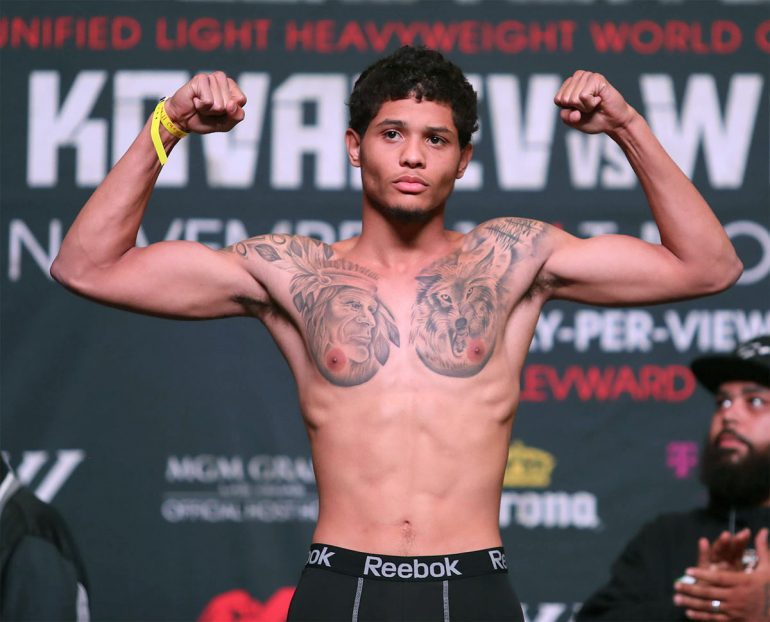 Sonny Fredrickson towers at over 6-foot-1, but somehow, he boils himself down to 140 pounds each time.

He manages to make weight through a strict diet, comprised of fish and chicken, and he had to do so again ahead of his ShoBox debut on Friday against Shohjahon Ergashev.

The undefeated junior welterweights will meet in a scheduled eight-round bout at Turning Stone in Verona, New York, and Fredrickson, and the lanky prospect from Toledo, Ohio, hopes his first TV appearance will prove he has a chance to emerge in a wide-open 140-pound division.

“I’m really excited to get on ShoBox, it means a lot to finally get a televised fight,” Fredrickson told RingTV. “It’s a good start to my career to get on TV more.

“I just want to go out there and have a great performance and get a knockout and show everything I can do in the ring.”

Fredrickson (18-0, 12 knockouts) has stayed active since his pro debut, with six fights in 2014, five in ’15, four the following campaign, and three last year.

Now, the 23-year-old will match up with another prospect with hopes of establishing himself in Ergashev, a 26-year-old southpaw from Uzbekistan now residing in Brooklyn.

While Fredrickson hasn’t faced any opponents of note yet, the volume puncher has built confidence from his many sparring sessions with lightweight titleholder Robert Easter Jr., who also hails from Toledo.

“Sonny’s got a great style, he’s always well-prepared; he lives in the gym,” said Fredrickson’s adviser, Mike Leanardi. “He just fought first week of November. Coach told him to take two weeks off and he spent the two weeks running.

“He has an entertaining style, he likes to knock people out when he should be boxing. He’s a hard worker and he gets better every fight, can’t ask for much more.”

Fredrickson has a vision: impress the viewing audience, with most fans watching him fight for the first time, and then secure more opportunities on Showtime. Sooner or later, Fredrickson hopes that leads to a world title shot.