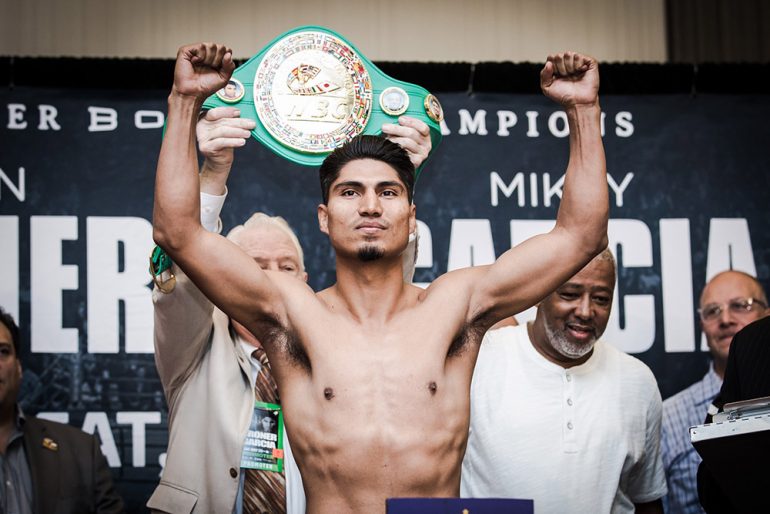 Mikey Garcia is gunning for a title in a fourth weight class.

The talented boxer-puncher will challenge Sergey Lipinets for his IBF junior welterweight title on February 10 at the Alamodome in San Antonio in a Showtime main event, it was announced Thursday.

Garcia (37-0, 30 KOs), who holds the WBC’s lightweight title, is coming off a July decision victory over Adrien Broner at 140 pounds. That’s where the Oxnard, California native will compete again, and he’ll be a heavy favorite to take the belt off Lipinets.

“It is a dream to have the opportunity to become a four-division world champion,” said Garcia, 29. “San Antonio has some of the greatest boxing fans in the country, including some key supporters of my Robert Garcia Boxing Academy family.

“Since my last fight, I have stayed in the gym. I can’t wait to give the fans in Texas and those watching at home on Showtime another great performance.”

The former kickboxing champion topped Akihiro Kondo in November to win the vacant belt in a grueling fight, and now he’s sure to earn career-best money against Garcia, THE RING’s No. 6 pound-for-pound fighter.

Lipinets (13-0, 10 KOs) possesses an aggressive style and good power, which should make for an entertaining scrap with Garcia. The Russian, though the titleholder, is ostensibly being brought in as an opponent for Garcia, one of Showtime’s biggest stars.

“Getting the title is one thing, but keeping the title is a more difficult task,” said Lipinets, 28. “I’m not about to give it away to anybody. No disrespect to Mikey Garcia or anybody else out there, but I’m keeping my title.

“Beating Mikey Garcia will put me in the elite of boxing where I believe I belong. I’m happy my team was able to put this great fight together. I can promise you this won’t be a snoozer. It’s going to be an action-packed fight for sure.”

Garcia is clearly one of the best fighters in the sport. Now, he’ll have the opportunity to accomplish a rare feat: titles in four weight classes.