Christina Hammer wants Claressa Shields fight: ‘She’s not a role model for the sport like I am’ 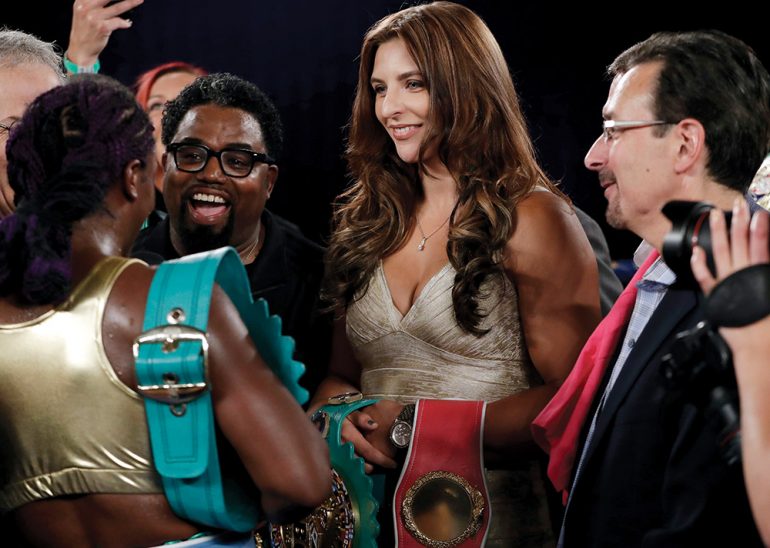 Claressa Shields and Christina Hammer face off after one of Shield's bouts last September. Photo courtesy of Associated Press
14
Dec
by Ryan Songalia

Christina Hammer has been a women’s boxing star in Germany for several years but the WBC/WBO unified middleweight titlist has set her sights on making it on the American stage next year.

Hammer (22-0, 10 knockouts) will make her U.S. debut on January 12, against Lisa Noel Garland (15-9, 8 KOs), with the fight to take place at the Turning Stone Resort & Casino, in Verona, New York. Hammer also revealed her desire to face Olympic star Claressa Shields, who will defend her IBF and WBC super middleweight titles against Tori Nelson in that night’s main event, and her interest in facing another star of the 168-pound division, Mexico’s Maricela Cornejo (9-2, 2 KOs).

“The U.S. debut is very important for me; I want to show that I‘m the real deal in female boxing. Ever since I won my first title, it has always been a dream of mine to fight in the U.S.A.,” said Hammer, in an email interview conducted through her U.S. handler Cleveland Jones.

“I want to fight both Cornejo and Shields in the future. I train hard and I‘m ready to fight everyone.”

The 27-year-old Hammer, who first won the WBO title in 2010 in her eighth fight, says her manager Harald Pia and Shields’ manager Mark Taffet are working together to build the fight up in significance, and expects it to occur in 2018.

“This will be the biggest female fight of all times,” Hammer said.

Like Hammer, Shields has had title success early, stopping the previously unbeaten Nikki Adler in five rounds to win the IBF and WBC titles last August in just her fourth pro fight. Hammer describes Shields (4-0, 2 KOs) as “an aggressive fighter but she needs time to gain more experience as a champion,” also saying she is “not a role model for the sport of boxing like I am,” saying the two-time Olympic gold medalist from Flint, Michigan hasn’t done enough outside the ring to help build the sport’s image.

“For example, I’m doing a lot of photo shoots and business deals with brands and companies. At the same time, I stay focused, disciplined and strong, as a longtime champion. My training never stops,” said Hammer, who does modeling and is a brand ambassador for underwear label Anita, on the side.

“Finding ways, as my example given, will give you more public attention outside the sport of boxing. Creating a buzz outside of boxing will allow you to become more interesting and inspiring to a lot of girls, women, people who normally are not interested in boxing.”

Shields has made some inroads, raising the sport’s visibility stateside, headlining on Showtime against Adler, receiving a 2017 Nickelodeon Kids’ Choice Sports Award for “Biggest Powerhouse,” and appearing in ESPN The Magazine’s 2016 Body Issue.

Not a role model for the sport cause I’m not a underwear model, ??? hmm… interesting. I’m a role model for the kids, teenagers and other adults. Not just showing my body to get more recognition in boxing??‍♀️ Hammer needs to wake up, sell boxing not sex? https://t.co/XWWEkw1Zok

In a tweet responding to the story, Shields said “I’m a role model for the kids, teenagers and other adults. Not just showing my body to get more recognition in boxing,” adding “Hammer needs to wake up, sell boxing not sex.”