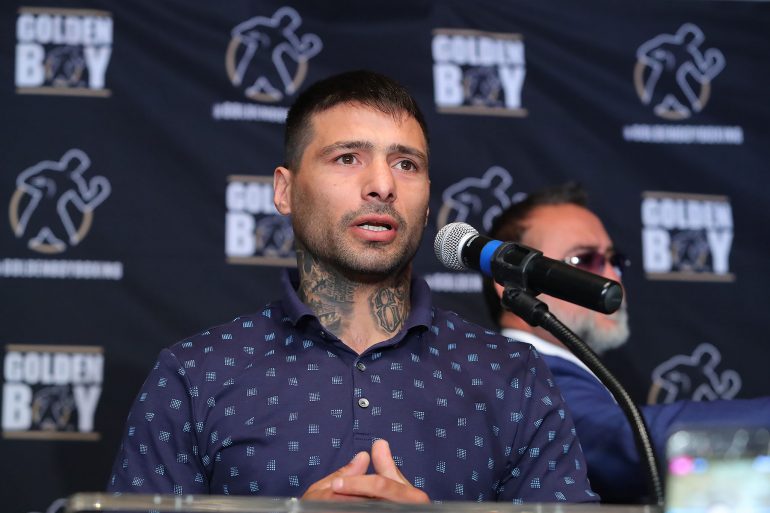 SANTA MONICA, Calif. — Many ho-hum fighters have grabbed titles in the four belt era, but there’s far better boxers who have been unfortunate.

Lucas Matthysse is one of them.

The crushing puncher from Argentina had an impressive run at 140 pounds, but he never won a title. This despite a string of knockout victories, none bigger than a third-round KO of Lamont Peterson in 2013. Matthysse received a shot at unified champion Danny Garcia in his next bout, but he was outboxed and lost a decision.

He simply was stuck in one of the best divisions in boxing.

Matthysse (38-4, 35 knockouts) finally received a second title shot in 2015, but his orbital bone was fractured and he was eventually knocked out by Viktor Postol.

Now campaigning seven pounds above at welterweight, Matthysse hopes to finally grab a title. He fights Tewa Kiram for the WBA “regular” title, which THE RING doesn’t recognize (Keith Thurman is the WBA’s “super” champion), in an HBO main event on Saturday at The Forum.

“Maybe it’s been bad luck but I do want to win the world title, that is a dream, that is something personal,” Matthysse told RingTV.com Golden Boy Promotions matchmaker Robert Diaz translating. “And I want to show it to myself, that ‘Hey, i can do it.’

Now 35, Matthysse might not be the same fighter who eviscerated opponents with a single punch. He’s had just one fight — a fifth-round TKO of Emmanuel Taylor in May — since the loss to Postol.

Matthysse looked sharp in the appearance, but age, inactivity and weight gain catch up to a lot of fighters. He’s determined to instead work his way up to the elite class of 147 pounds, the best division in boxing with fighters like Terence Crawford, Errol Spence Jr. and Thurman competing at welterweight.

And he hopes the hiatus from the ring to “recharge the batteries” paid dividends, too.

“And after the Taylor fight, well here I am, ready to go and give it more. And the reason I did it was because I wanted to continue fighting. I love what I do.”

For so long, an immense amount of pressure was placed on Matthysse’s shoulders. He developed a cult following among boxing fans who loved him for ferocious style, and he was expected to blast his way through everyone.

“The Machine” instead ran into fighters like Garcia and Postol who were able to use their guile to outbox him, but he has new life now at welterweight, and he’s able to fly under the radar now. The pressure is gone.

And hopefully for Matthysse, it all culminates in the realization of his dream — a world title around his waist.