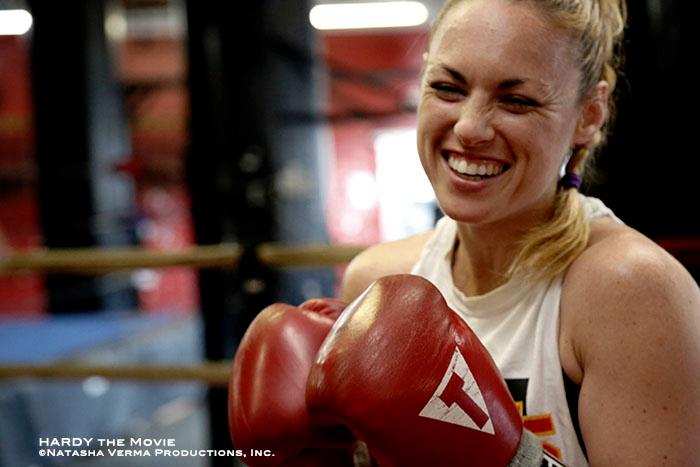 They aren’t like us, we must remind ourselves constantly, in order to give them the proper and deference and respect they deserve.

Boxers and fighters step into a ring or cage with the knowledge, yes, perhaps blunted by excessive optimism that is necessary insulation to guard against anxiety, that they could be severely hurt, God forbid, maybe even fatally, during an encounter.

On October 20, in a cage set up in Connecticut, and on national television, Heather Hardy had an impromptu rhinoplastic surgery performed upon her, compliments of a wicked and swift roundhouse kick by foe Kristina Williams. Hardy’s nose seemingly shattered; blood flowed, copiously, urgently…but she barely blinked and kept on rumbling.

The ref stepped in to take the Brooklyn-based single mom to get seen by a doctor, who recommended this, her second mixed martial arts fight, be stopped. Two minutes into round two, the hitter who holds a 20-0 mark (with 4 knockouts) as a pugilist, fighting under the DiBella Entertainment banner, was 1-1 in MMA.

WAS HER CAREER FINISHED?

Those surrounding her, and her massive fanbase, whom have come to revere her as a role model for handling the impediments life and fate have thrown at her, worried for her. Had her career been shattered, like that nose appeared to be? Would she need reconstructive surgery from “The Kick Heard Around the World,” as she, in a shockingly self-effacing manner, joked in days post-ceding…and would she be able to soldier on fighting afterward?

It turns out the nose held together better than feared…fractured, yep, but to smithereens, no. So, she got about to healing…to settle into a period of patience, letting nature and the miracle of regeneration take course. No contact, the docs said, until we give you the all-clear. And then after a couple months, the doc gave the go-ahead. You can spar, lady, bonne chance.

On Wednesday morning, at the famed and fabled Gleason’s Gym, Hardy’s boxing home-base, run by the benevolent patriarch Bruce Silverglade, Hardy laced up gloves, swallowed hard and put herself into a situation that could have resulted in a severe setback for an almost 36-year-old who has successfully fast-tracked her accomplishments to where she’s on the cusp of seeing them pay off.

“I sparred,” Hardy told me later in the day. “With Ronica Jeffrey and Melissa St-vil. At Gleason’s! I was more worried about my nose than I ever worried about my face before,” she said, chuckling. “I was nervous beforehand, not worried about getting hurt. We planned the sparring last week, since we just hit the six-week, no-contact mark. Melissa has a fight in February and will start training and I have a tentative fight date coming up, so I needed to check out the nose and see how it held up, see how breathing would be with the mouthpiece and how I would react to getting touched on the face. And I didn’t exactly ease my way in, boxing two world champions, as my first spar!”

I asked her to talk about the actual depth of fear – or nerves – or what have you.

“I worried that a potential shift or swelling or bruising or problems breathing could potentially delay my training and my next fight. But everything was fine and I did take one or two shots to the nose. Pretty sure I’ll do my first MMA sparring, light sparring, next Wednesday and have just really been drilling and working technique since I went back to the gym in November.”

Fighters aren’t like us, my friends. And this is why they deserve ample credit and respect for doing what they do.