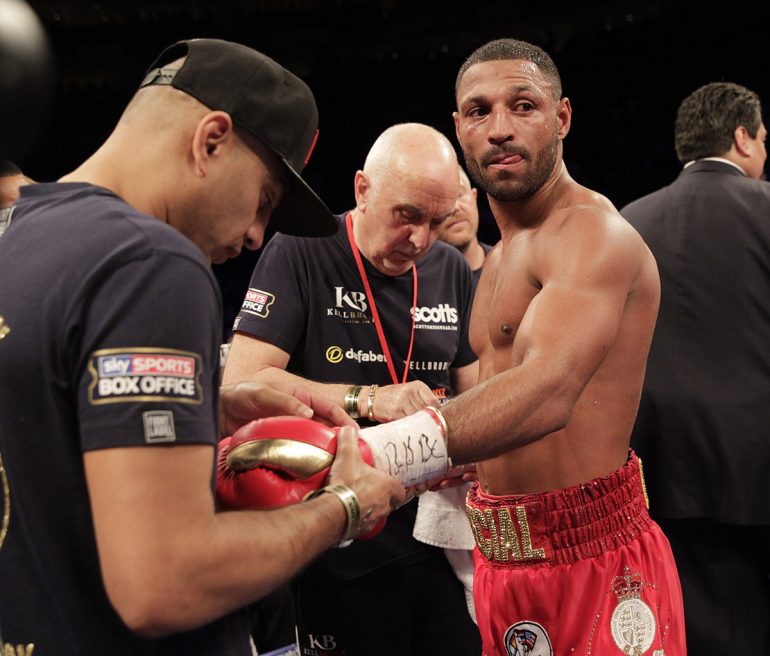 It’s a move that has been anticipated for some time.

Former IBF welterweight titleholder Kell Brook will finally move on to pastures new at 154 pounds when he faces Sergey Rabchenko at the FlyDSA Arena in Sheffield, England, on March 3.

Brook, who is currently rated No. 4 by THE RING at welterweight, aims to become a two-weight world titleholder after losing consecutive title fights to Gennday Golovkin and Errol Spence, at middleweight and welterweight respectively.

Rabchenko is ranked No. 7 by the WBC and is a former European champion at junior middleweight.

“I can’t wait to get back in there,” said Brook. “The Spence defeat cut deep and it took me some time to come to terms with it, but now I’m back with a new challenge at 154 pounds. I believe I will be stronger and better than ever in the division. My focus now is on becoming a two-weight, two-time world champion.

“Rabchenko is a dangerous fight for the return but I want to jump straight back in at world level. I think our styles will gel for an electric fight. I’m already deep in camp and I can’t wait to feel the atmosphere again in my hometown.”

“I’m really looking forward to this fight with Kell Brook and it’s going to be a war,” said Rabchenko. “This is a high-profile fight in the division that has always been mine. The winner will go on and challenge for the world title – it’s a must win fight for both of us.”

Tickets for Brook’s clash with Rabchenko are priced £40, £60, £80, £100, £150 and £250 VIP. Tickets go on sale at 9 a.m. tomorrow (Tuesday December 12) to Matchroom Fight Pass members from www.stubhub.co.uk and on general sale from 9am on Wednesday December 13 from the FlyDSA Arena at www.flydsaarena.co.uk and on Tel: 0114 2565656. VIP tickets are exclusively available from www.matchroomboxing.com