Commentary: The Legend of Guillermo Rigondeaux, myth versus reality 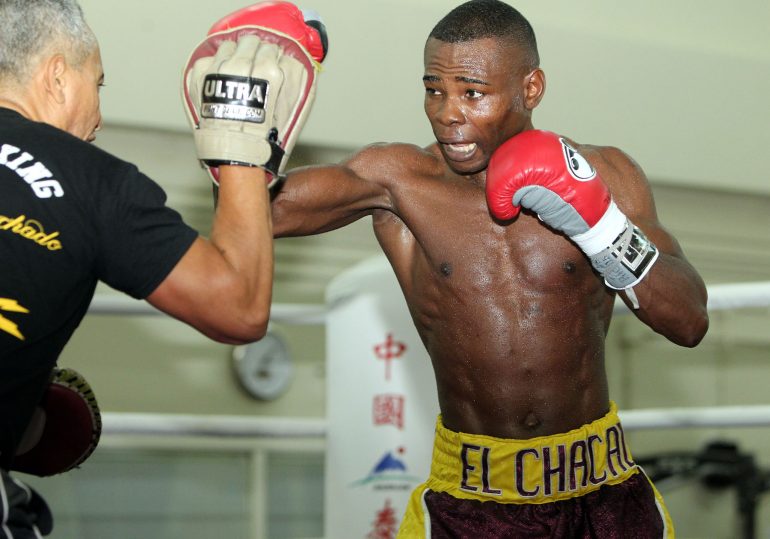 Have you ever seen Bruce Lee playing table tennis with a nunchaku? Sure you have! The iconic martial arts star using two sticks joined by a chain to strike a ping pong ball with almost psychic anticipation. And he doesn’t miss once.

Being a former martial artist and a huge Lee fan, this black and white footage (from a Nokia commercial) gets sent to me via YouTube several times a year. The only thing is, it’s absolute bullshit. Simple video tricks, and anyone who believes that’s Bruce Lee needs to soak their head in a tub of ice water.

Why do some people believe it’s Bruce Lee? Because they believe in the legend of Bruce Lee. After all, he could snatch a quarter out of a person’s hand and leave them with a dime. He could perform one fingered push-ups. He could send a person reeling backwards with a one-inch punch. His fight scenes had to be slowed down, so you could actually see what he was doing.

On Saturday, scores of fight fans believed in the legend of former unified junior featherweight titleholder Guillermo Rigondeaux. Why wouldn’t they? The dazzling Cuban was a two-time Olympic gold medalist. He won a world title in his ninth professional outing. Good fighters couldn’t hit him on the ass with a handful of rice, or they avoided him like the plague. Oh, and don’t forget, Rigondeaux can look damn good on the mitts.

Vasyl Lomachenko, who many believe is the finest fighter in the world, didn’t know what he was letting himself in for. At best, Loma would squeak past the brilliant Cuban slickster on points. And, at the end of 12 rounds, he might be lucky to get the verdict.

Yeah, sure – cue that game of ping pong.

The reality was altogether different. In the same way that the Bruce Lee imitator video is trickery – fool’s gold, a fugase – that’s exactly what we got when the bell rang at The Theatre at Madison Square Garden last night. The 37-year-old (if we take his word for it) Rigondeaux merely impersonated himself or hung on for dear life. There are several reasons for that which went largely ignored by people who should have known better.

One, it doesn’t matter how good you are; age is one merciless enemy. Two, inactivity is just as big an enemy as age and it is equally as destructive. Combine them both and you’re literally asking to get a foot in your ass. If that wasn’t bad enough, Rigondeaux was jumping two weight classes in a bid to defeat a man who was his equal in terms of skill. 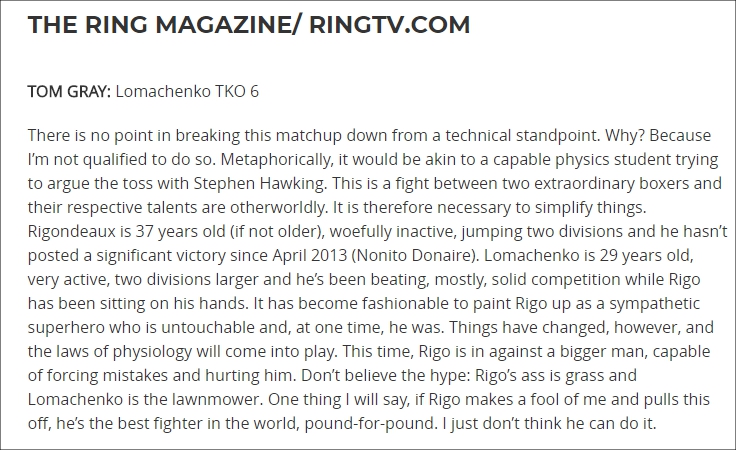 I get fights wrong, everyone does, but this matchup was easier to call than most.

So, what are the ramifications of what we saw?

Rigondeaux didn’t like what was happening so he quit after six rounds. That’s the reality. Boxing history is replete with heroism in the face of injury. A broken hand (if that turns out to be the diagnosis) is no excuse. Arturo Gatti broke his right fist against Micky Ward’s hip in fight three. Did he quit? No, he made the injury worse by smashing Ward’s skull round after round. Ask yourself: If Rigondeaux was five rounds up, rather than five rounds down, would he have signaled to his corner that the game was up?

I think you know the answer.

How will history remember Rigondeaux? The man is a boxing savant. One of the most skilled technicians ever. A defensive genius who was too good for his own good. His flaw, however, was that he sat on his hands and didn’t force the world to take notice when he was ignored. A fighter is responsible for staying active. A fighter is responsible for providing entertainment. Too often, Rigo put fans to sleep rather than opponents or he disappeared altogether.

And what of Lomachenko? The Ukrainian matrix is a force of nature and it’s very hard to envision his downfall happening anytime soon. If the 29-year-old whirlwind moves on to lightweight, maybe Mikey Garcia can provide a stern test. However, given Garcia’s history with Lomachenko’s promoter, Top Rank, that fight might be as hard to make as it would be to fight.