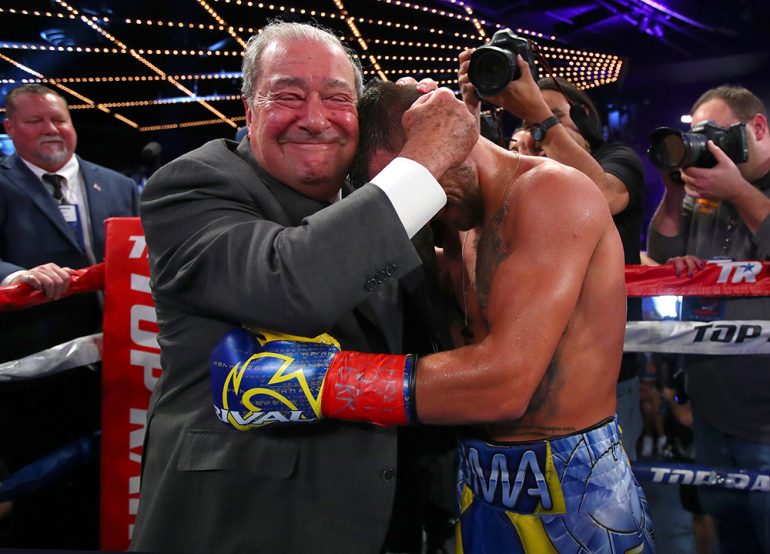 NEW YORK — Outside of his second pro fight, when Orlando Salido blew weight and fouled his way to a close decision victory, no one’s been able to hang with Vasyl Lomachenko.

He’s dominated the competition at 126 pounds as well as 130, and following his brilliant performance against Guillermo Rigondeaux on Saturday, it’s fair to wonder if there’s anyone out there who can beat Lomachenko, much less test him.

The two-time Olympic gold medalist will soon seek a title in a third weight class, possibly in his next outing. But his hall of fame promoter, Bob Arum, doesn’t foresee any challenges for Lomachenko there, either.

“Maybe he’ll go to 140, I don’t know. He’s going to do this to everybody. We’ll be able to make the fights. With ESPN behind us we have plenty of money to offer for big fights. ESPN wants the best and this guy is the best.”

Linares is one of the best athletes in boxing, and a win over the Venezuelan would net Lomachenko THE RING’s lightweight championship. If Lomachenko keeps rising in weight, sooner or later he’ll run through an opponent he can’t make submit.

Linares is a former 126-pound titleholder, just like Lomachenko, but the 32-year-old actually started his career at 122. He’d own a one-inch height advantage, but that would be enough to hold off Lomachenko? Probably not.

Garcia could be the one man below 140 pound who can challenge — or even beat — the two-time Olympic gold medalist.

Mikey would actually concede an inch in height to Loma, but he proved his strength with a complete clowning of Adrien Broner in a 140-pound fight over the summer.

Surely, the chance to knock off the prized pupil of Top Rank, whom Garcia went through a bitter with, would please the lightweight titleholder. And it’s a fight Lomachenko fancies, too.

“MIkey Garcia’s an excellent fighter,” Arum said. “He’ll hang with him until he’s ready to get knocked out and then he’ll probably quit.”

Whether it can actually happen is another matter. And if you listen to Arum, the result is a foregone conclusion.