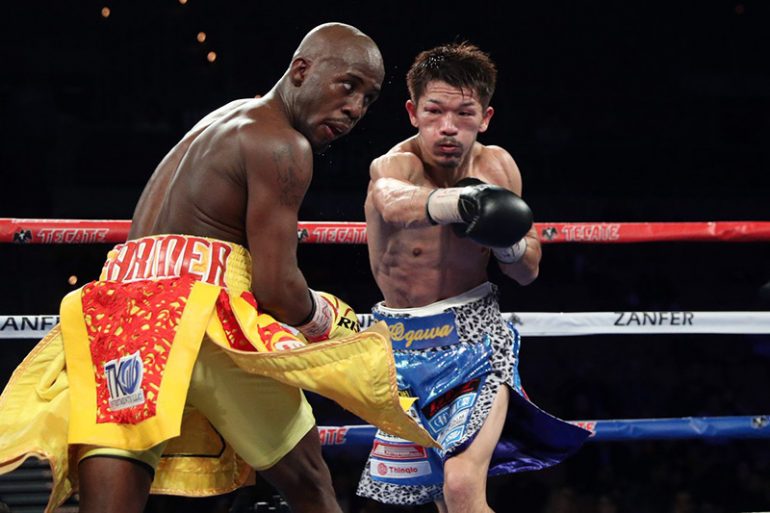 LAS VEGAS — Kenichi Ogawa pulled off the upset by gutting out a split-decision victory over Tevin Farmer to claim the vacant IBF junior lightweight title in the co-main event of the Salido-Roman card at the Mandalay Bay Events Center.

Ogawa came into the fight as a relative unknown, having only fought in his home country of Japan prior to stepping in the ring with Farmer. Many assumed that the surging Farmer (25-5-1, 5 knockouts) would be able to out-skill his opponent over the course of 12 rounds. In the early going, that was the case as Farmer was able to counter effectively and control the action while Ogawa unsuccessfully attempted to pressure the Philly fighter. However, Ogawa refused to settle for what Farmer offered and opted to make it a fight rather than a boxing match. After it appeared that Farmer was taking over in the sixth, Ogawa ramped up the aggression in the seventh and found success landing some heavy leather.

The rounds were nip-and-tuck with Farmer managing to make Ogawa miss, but the Japanese fighter kept on the offensive. Perhaps a tactical mistake by Farmer did him in as he took his foot off the gas in the final third of the fight and decided to slip without countering.

Farmer clearly tired in the championship rounds as Ogawa continued to press forward and make it as much of a fight as he could. In the end, two judges scored it for Ogawa (115-113 and 116-112) while one judge saw it in favor of Farmer (116-112). Ogawa claimed the title that Gervonta Davis was stripped of when he couldn’t make weight for his defense against Victor Fonseca back in August. He also ended Farmer’s 18-fight winning streak while improving to 23-1 (17 KOs).