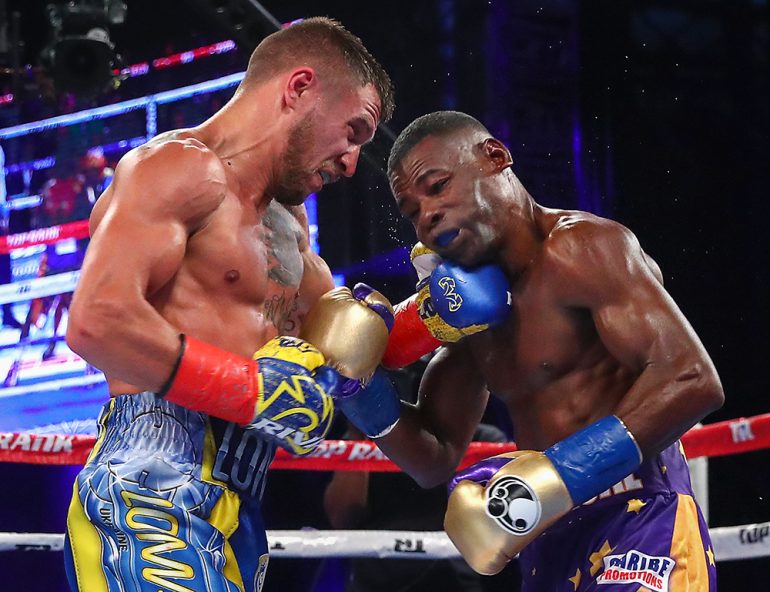 NEW YORK — The fight was billed as a historical matchup, the first-ever meeting between two-time Olympic gold medalists.

It turned out to be anything but legendary.

Rigondeaux quit on his stool following Round 6 with complaints of a broken left hand. The Cuban expat had no answers for everything Lomachenko did — light punching to open up the guard, a piston-like southpaw jab and relentless volume punching — other than to duck and clinch.

He was docked one point by referee Steve Willis in Round 6 for excessive holding, and other than a pair of nice overhand lefts that connected the previous round, it was a mismatch.

Lomachenko retained his WBO junior lightweight title and cemented his status as one of the best fighters in the world regardless of weight with an undressing of Rigondeaux — who was moving up two weight classes — Saturday at a sold-out Theater at Madison Square Garden on ESPN.

“I guess I’ll change my name to No-Mas-Chencko,” joked Lomachenko, 29, who has now stopped four consecutives opponents on their stool. “This is not a big win for me because this wasn’t Rigondeaux’s natural weight. It was a good win, but not a big win.”

Rigondeaux felt discomfort in his left hand during Round 2, and damaged it further the following round (he headed to Bellevue Hospital for examination). Following the sixth, with Rigondeaux down 59-54 on two cards and 60-53 on the third, the 122-pound champion and trainer Pedro Diaz jointly decided there was no point in continuing with the southpaw’s power hand possibly fractured. 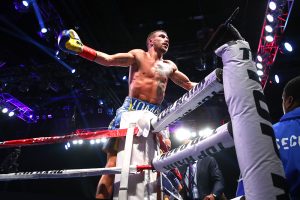 It didn’t seem to matter, as Lomachenko (10-1, 8 knockouts) had his way. He threw punches from every angle, slid to his left, to the right, and found openings where there didn’t appear to be any. The Ukrainian (who also held a title at 126 pounds) exerted his superior size on the inside, and whenever Rigondeaux ducked — and there were many instances — Lomachenko bent down and peppered him with punches in rapid succession.

It was a shocking performance considering Rigondeaux’s vast credentials entering the fight. Two Olympic gold medals, recognition as perhaps the best defensive fighter in the sport and status as THE RING’s No. 5 pound-for-pound fighter. Lomachenko made all the plaudits disappear in one night.

“What I sense is I’m seeing something special,” said Lomachenko’s hall of fame promoter, Bob Arum. “It will have to be part of history. I’ve been around great fighters. (Sugar Ray) Leonard, (Marvin) Hagler, Floyd (Mayweather), (Manny) Pacquiao. I’ve never seen a fighter like this, even (Muhammad) Ali.”

Rigondeaux (17-1, 11 KOs) found success in a feeling-out first round, and won the frame on two of three scorecards, but he wouldn’t win another. The 37-year-old didn’t connect on more than three punches in any round, per CompuBox, and looked generally bewildered in the ring for the first time ever.

Rigondeaux yearned for a matchup of this magnitude since he toppled Nonito Donaire, the reigning fighter of the year, in 2013. But the fights never materialized. Instead, Rigondeaux was met with a glut of excuses at every turn, each one more nonsense than the next. Names like Carl Frampton and Leo Santa Cruz avoided Rigondeaux, reasoning that he wasn’t a big enough draw.

In reality, no one wanted to match wits — and skills — with the maestro.

It left Rigondeaux no choice but to climb two weight classes, jumping over featherweight entirely, to challenge Lomachenko. The fighters held a second-day weigh-in Saturday morning, with each man unable able to exceed 138 pounds.

Lomachenko came in right under the limit, at 137.4 pounds in boxer briefs, while Rigondeaux weighed 130 even in a full sweat suit. That size disparity was evident in the ring. So was the skill disparity.

“I lost, no excuses,” said Rigondeaux, who suffered a defeat for the first time since a 2003 amateur bout. “I injured the top of my left hand in the second round. He’s a very technical fighter, he’s explosive. I’m gonna come back because that’s what I do. The weight was not a factor in this fight. It was the injury to my hand.”

Lomachenko’s legend only grows with each successful outing. He made Nicholas Walters, a formidable puncher, quit last November under a bevy of tricks and combinations. He pummeled lesser fighters during this campaign like Jason Sosa and Miguel Marriaga, middling competitors with little nuance in their game.

Rigondeaux represented a different beast altogether, at least on paper.

Can anyone test Lomachenko, much less beat him? Arum doesn’t believe so.

And after a performance like this, who can argue?